Late life adventures: high jumping at 91, crossing the Atlantic in a raft at 85! 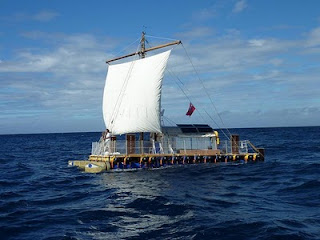 I recently discovered that there's a team of sailors crossing the Atlantic in a raft. Aboriginal peoples probably crossed the Atlantic on rafts many thousands of years ago. That's part of the allure of it. It's a primal journey across a vast ocean in a small craft. In 1947, Thor Heyerdahl led the Kon-Tiki expedition which was inspired by reports and drawings of Inca rafts made by the Spanish Conquistadors, and by native legends and archaeological evidence suggesting contact between South America and Polynesia. Heyerdahl built a replica of an aboriginal balsa raft. He and five companions left Callio, Peru and crossed 4,300 miles in 101 days, reaching Polynesia. His journey showed that the ancient Peruvians could have reached Polynesia using rafts.

In 1997-98 a colorful permanent dropout/adventurer named Poppa Neutrino sailed a raft named Son of Town Hall from North America to Europe, becoming the second modern person to sail a raft across the Atlantic. His raft was made entirely of recycled materials.

The current expedition is sailing on a raft they've named An-Tiki. Their captain is 85-year old Anthony Smith, a British author and explorer who wrote the best-selling book The Human Body. The An-Tiki team is devoted to raising awareness about the lack of clean water for many peoples on the planet. The expedition is raising money for WaterAid, a charity that works to improve clean water conditions in 26 countries in Africa, Asia and the Pacific region. According to WaterAid, "Mr Smith and his three-man crew of 'mature and intrepid gentlemen', aged from 56 to 84 years old, will use only the ocean currents and a sail to make the 2,800 mile voyage from the Canary Islands to the Bahamas."

The raft is constructed of blue polyethylene water pipes. The 4 main pipes are each approximately 39 feet long, and the raft measures 20 feet wide. You can read more about the voyage, see photos, follow their progress across the Atlantic and read blog posts from the team at their website

If crossing the pond on a raft doesn't do it for you, what about high jumping at 91? 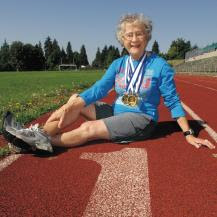 I discovered Olga Kotelko, a 91-year old track star late last year in an article in NY Times As the Times article notes, "Masters competitions usually begin at 35 years, and include many in their 60s, 70s and 80s (and a few, like Kotelko, in their 90s, and one or two over 100). Of the thousands who descended on Lahti, hundreds were older than 75. And the one getting all the attention was Kotelko. She is considered one of the world’s greatest athletes, holding 23 world records, 17 in her current age category, 90 to 95." By studying Kotelko and other old athletes, researchers hope to understand more about longevity, health and physical capability.

These stories of late-life prowess are inspiring to me. There are certainly days I wish that someone would offer me a place on a cross-Atlantic adventure. I imagine that it would be very healing and invigorating to live on a raft in the midst of the weather, with the immensity of the ocean and sky filling the entire landscape. Since I have no sailing experience, there's not much likelihood of that.

I admire the mastery of Olga Kotelko and other late-life athletes. We will be seeing more and more of them, I suspect. And that's all to the good.

What are your ideas about late life adventure? Do they focus on travel to other lands or learning something completely new right where you are? I'm with Oprah when she says,"The biggest adventure you can ever take is to live the life of your dreams."
Posted by Gaea Yudron at 7:18 AM