For the past 15 years, I haven't had any pets, so when little Samo came to visit me for a month, it was a big adjustment. She is an endearing, playful and dear little gal, but I find that having to care for a puppy has cramped my style, in terms of my usual self-care, spiritual and recreational activities. I have been to the Y only once rather than my usual several times a week. Swimming at the hotsprings has suffered a similar fate. It's been hard to go to spiritual practices at Tashi Choling, the Tibetan Buddhist center I belong to. Going to the movies or a dance class likewise. In fact, though I am fond of Samo and like animals in general, I will be so glad when on July 19th she ends her visit chez moi. Then there will be no more chewed egg cartons and toys strewn on the floor and much less cleaning both of my house and her own silky easily matted hair, which takes constant grooming. A puppy resembles a toddler in many ways. She needs a lot of care and attention. You cannot leave her for long at her own devices. In fact, being with Samo reminds me of those years when I had little kids and knew that very little of my time was my own. I have grown accustomed to more freedom. I am not a woman who longs for a pet.

Instead, I seem to be a woman who wants to make positive aging buttons, which I was able to do the other day, thanks to my old friend Carolyn Myers, the conveyor of a small, heavy and somewhat greasy button-making machine that her theater colleague Terry Baum acquired last year when she was running for mayor of San Francisco on the Green Party ticket. In that campaign, wonderful buttons were created that said "TAX THE RICH. DUH."

Carolyn knows the peculiar ways of the button making machine and she did most of the work while I cut out the rounds that bear the messages AUDACIOUS AGING, for a playful and festive little button with some fireworks in the background and BOLD, a button Carolyn declares "brilliant."

I will be interested to see people's reactions to both of these buttons, which we'll be using as donor perks in our upcoming IndieGoGo fundraising campaign. I like them both.

While we were having a button-making party, we revisited the popular topic "What would you do if you suddenly came into a lot of money?" What constituted a lot of money was not defined but it certainly included not having to work at a job just to bring in the bacon. Beyond that arose great fields of potentiality. 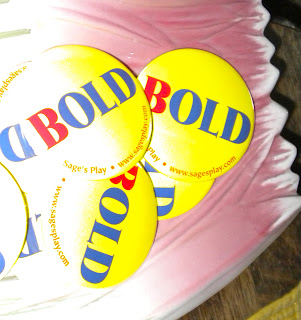 One could be generous, we mused as we made the buttons, one could be very generous. Both Carolyn and I would make great philanthropists. We appreciate generosity. We like being generous, and we are generous each in our own way.

What would you do if you suddenly received a lot of money? At least half a million, let's say for a modest starter. How about a million? It is a great exercise in expanding one's view to contemplate receiving a big windfall.

Would your life change a lot? Would you use the money to fulfill some dreams that you've been holding back on? Travel? Helping family members? Would you start a school? Buy land?

I can't say for sure what I would do. I think of helping my children, friends, the Tibetan Buddhist center I love. I think of land and travel and community, of fulfilling more of the vision  of Sage's Play.

I am going to have an opportunity to engage in this business of receiving money soon, because of our fundraising campaign on IndieGoGo. I have been reading about people who've raised a lot of money that way. It's really fun to know that people are achieving their artistic and social change dreams and raising money for medical care through IndieGoGo and Kickstarter. In fact, it's completely inspiring to realize that thousands and thousands of people, most of them complete strangers, are supporting each other's lives and work in this way.

The IndieGogo campaign is an exciting way to reach out to many more people with the story of positive aging and our musical revue A New Wrinkle.

Being bold is something to live into at any age. To me being bold is taking risks, doing new things even if they are somewhat scary. Being bold is also having the courage to be very still and relax into what-is, letting go of everything and resting like a mote of light in the sky. 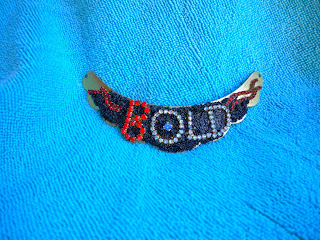 The magnet I made awhile ago is up on my refrigerator reminding me of the real alchemical work of aging, a time of summing up, harvesting life's meaning, sharing one's gifts with others, and practising the art of letting go.


Meanwhile, it's the height of summer and the flowers in the front garden are profusely blooming, changing each day in their display. These love-in-a-mist are sharing their beauty in delicate constellations. 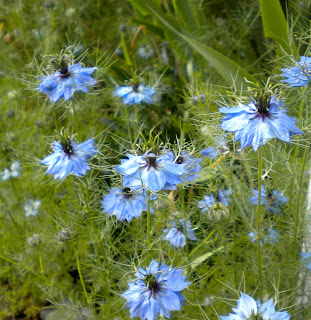 All the yards of compost I dug into the soil has had results. Roses, daisies, lavender, feverfew, daylilies--this is the most wonderful garden I've had in my life. It's vibrant, old-fashioned and filled with lovely surprises. Bees and butterflies move from one plant to another. The big old lavender plant is vibrating with bees right now.

An artichoke I planted just this year already presented 5 beautiful artichokes--what a surprise gift-- and in the back garden, there are knobby reddish kohlrabi which look like little spaceships, beautiful big squash leaves with squash hidden underneath, immense comfrey leaves mixed with the tomatoes, arugula, kale, yarrow, rosemary and other plants, some of which have been here for many years. 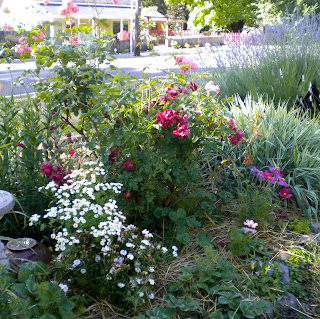 The other day I was reading the newsletter of HelpAge, an international organization that works with older people in many countries and cultures. The problems of age prejudice, isolation and diminishment that many older people face in our culture are faced by older people in developing countries, who must also deal with even more physical hardship, neglect and poverty than we have here.

We are fortunate to have the opportunity, comfort and leisure to meet aging as a rite of passage and a gateway into deeper self-understanding. The more of us that recognize the power of aging and live into our full potential, engaging meaning and purpose, the more influence we will exert to create positive change in ourselves and the world. This is the cultivation of the garden of the soul.
Posted by Gaea Yudron at 9:27 PM 3 comments: