Thinking about Three Isms from the Sixties 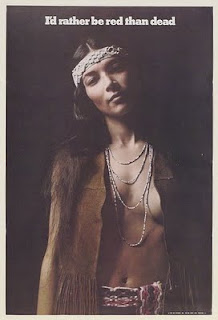 Did you like this poster when it first came out? I did, and it turns out I still do.

I've been mulling over three isms that got going in the Sixties--racism, sexism and ageism. Yes, ageism is a word that was coined in the Sixties by Dr. Robert Butler.

A lot happened with racism and sexism--words that were associated with vigorous movements for social change. After all the consciousness raising, protests, marches, dialogues and confrontations, people understood what was racist and what was sexist. They got educated. There were words you shouldn't use and ways it was not right to act.

No education of that kind ever happened with ageism, not in the Sixties or in the 40 plus years since then. It's as if the word and the social issues it represents just went into hiding for decades. So people are still uneducated about what constitutes ageism. And that includes a lot of older adults, too. Some older adults seem unwilling to acknowledge ageism, or pretend it doesn't exist. With a growing older population, isn't it time for some positive change? I think so.

Ageism was one of the main issues that propelled me into writing the play I'm currently working on, a musical about aging. The play explores social attitudes towards aging, sexuality in later years, retirement, and the surprising secrets of the aging brain among other items. It is a piece of social change theater, in which stereotypes, issues and themes can be displayed, often with humor, and sometimes with a bit of an edge. I hope it will help people to incorporate new ideas and behaviors about age and aging into their lives and the world they live in. I'm interested in changing the current Decline Paradigm of aging, and all the stereotypes about older adults that accompany that paradigm. It's a matter of self defense to begin with. All those ads--"don't let old age catch up with you!" and so forth and on and on. Who needs it? Not me, and I'm guessing, not you either.


There are people who believe that happiness is the province of the young and that old people are sad and lonely. This seems to be another example of those strange and untrue concepts about beings of the older vintages. (ageism: prejudice against and strange stereotypes about old people)

In fact, a spate of recent studies confirms that people actually grow happier as they grow older, and that old people are the happiest adult age group.

I know I'm happier than I've ever been at any other time of my life. I feel much more relaxed and comfortable about being myself. I accept and love myself more than I ever did. I am more emotionally flexible and resilient (and am grateful that I am also physically flexible and resilient, too). I'm much less influenced by what others think. I am more calm and accepting. I appreciate life, people and events more, and at the same time, I feel more detached.

You can read more about the studies of happiness and age in this New York Times blog.
http://well.blogs.nytimes.com/2008/07/14/happiness-isgetting-old/

The brain has something to do with it, of course. Now that researchers are finally paying attention to the aging brain they are making some exciting discoveries.

Scientists used to believe that we stopped producing new brain cells during adolescence. But now they've finally discovered that the brain keeps on producing new cells throughout life.

Psychologists used to think that cognitive abilities peaked in early adulthood. Unfortunately, a lot of people still believe this, though research shows that cognitive abilities actually peak in midlife or even later, depending on the person. There are so many examples of people in their 80s and 90s who embody this truth, people who create marvelous and original art, literature, philosophy, psychology and social activism in their later years.

Researchers discovered that older adults use both hemispheres of their brain simultaneously. That's pretty interesting, isn't it? Powerful and holistic.

And let's not forget "dendritic density," the accumulated forest of dendrites from everything you've experienced and learned, all dancing and communing with each other happily.

All that adds up to mean that older people are capable of more complex, nuanced thinking and have great reservoirs of creativity.

If the subject excites you as much as it does me, pick up The Mature Mind by Gene Cohen, M.D., Ph.D. It's an inspiring read, full of fascinating research, interviews and cutting edge insights on aging and creativity.

I'm a fan of Dr. Cohen, who is very brainy, bighearted and also looks a bit like a leprechaun. As the founding chief of the Center on Aging at the National Institute of Mental Health, he interviewed and worked with thousands of older adults over a period of 20 years.

His upbeat perspective is a refreshing antidote to some prevailing attitudes about age. Here's what some authors have to say about The Mature Mind.

"Gene Cohen nails it: The brain can get better with age! With authority and warmth, he demolishes the myth of inevitable mental decline and explores how the brain expands and develops in the later decades of life."
— Abigail Trafford, author of My Time

"Cohen has coined the term 'developmental wisdom' to describe the emotional growth and wisdom that many adults acquire as they age. His book is sensible, useful, and hopeful—he is a developmentally wise man himself."
— Mary Pipher, author of Reviving Ophelia

"Gene Cohen teaches us that the rich possibilities of life—including the life of the mind—continue well into the latest of our years."
— Robert N. Butler, M.D., President and CEO, International Longevity Center

Dear readers, there you have it. Even though the culture suffers from an under-appreciation of the positive contributions and qualities of age, older adults are happy. Even though they experience various kinds of losses and limitations, they are happy. There's plenty that all of us can learn from this, I do believe. And plenty to appreciate about the marvelous way that we human beings evolve and grow over time.
Posted by Gaea Yudron at 5:44 PM No comments:

First Time Journey in the Blogosphere 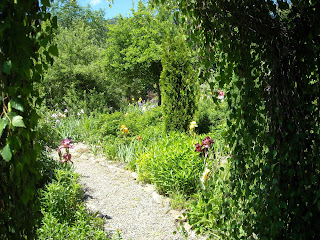 I like the word blogosphere because for some reason it makes me think of Jules Verne’s 20,000 Leagues under the Sea—traveling in a strange contraption into an exciting new world.

And that just naturally makes me think of child’s play, which continues to be marvelous at any age. People may say “that’s just child’s play” about something that is very easy to do. Sure, child’s play is easy-- guided more by imagination than by fixed rules. Remember that magical sense of wonder, when everything else faded back until nothing remained but gazing at the amazing shapes of clouds changing in the sky, or the pattern of fireflies in the dark, or the moment of throwing the ball into the air, or the smell of the garden near the old house after rain?

Sage’s play is very similar to child’s play. It’s just that there are years of lived experience stirred into the sauce. In the later years, if one is just lucky or chooses to make it so on purpose, there are moments or hours when time opens out, slowing down into the eternal moment as it did in childhood. Then, the inherent magic shows itself.

Old people with all their faculties quite intact thank you, can be childlike, spontaneous, free of conventional rules, absorbed in the magic of the moment. This is one of the unsung beauties of aging, and I want to sing about it some here.

Sage’s play can take many forms, from social change through creative expression, nurturing, mentoring, passing on the stories and the more invisible work of healing, integrating life experience and letting go.

I want to affirm the profound value of age and old people to individuals and society. I want to explore the benefits of creativity and wellness in age. I want to participate in changing our cultural perspective on age and aging to a happier, more real and respectful one.

That’s why I have named my blog Sage’s Play. Here's to making the most of the beautiful experience of being alive.

BONUS!
The Pew Research Center recently published an interesting study that describes how younger people view old age, what they expect from their own old age, and how their beliefs or ideas differ from the reality of older adults’ experience.

Generally, younger adults have unrealistic beliefs regarding the prevalence of memory loss, inability to drive and sexuality in age. In other words, older people have better minds, drive more cars and have more sex than younger people believe they do. (But I’m not telling you anything new, am I?) Fascinating.

P.S. Don’t buy into the decline model of aging! And if you don’t know what that means, stay tuned.
Posted by Gaea Yudron at 1:02 PM 1 comment: