A Cottage Embraced by Roses--and Ivy

For years I imagined living in a place surrounded by flowers-- and now here I am--this is my second week in my new home, which I call Casa de las Flores. Perhaps it sounds a bit magical to womanifest a home from the imagination and there was certainly magic in it-- but it was also three months of uncertainty dealing with brokers, banks and paperwork-- adding up to the most stress I've experienced since my second marriage broke up 14 years ago. I personally like to keep a low stress profile.

Real estate is crazy these days, as my agent said several times. Since the fiscal meltdown in 2008 things have gotten wacky. Real estate being just one small example of the wackiness at present. But finally everything worked through to a successful finale and with the help of Guatemalan Carlos and his friend my precious treasures, Important Papers, unfinished manuscripts, kitchenware, books and memorabilia were schlepped here to Phoenix, two towns away from Ashland.

The garden in front of the house is filled with roses, herbs, daylilies, crysanthemum, beebalm, daisies--in fact I haven't completely surveyed all the myriad plants that ornament this piece of ground, attracting butterflies and bees. There's an old-fashioned swing that seats two people in the front yard, too. 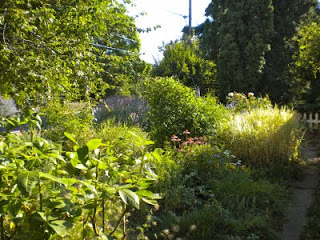 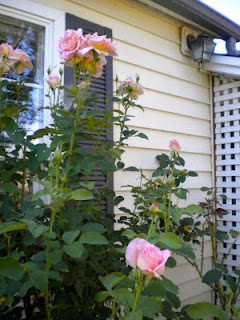 The front of the house was built in the 30s, and then an addition of another bedroom and bath was added 15 or more years ago. I am a fan of cottages from the 30s and 40s. They have a cozy, welcoming quality. That feeling of welcome-- in addition to the marvelous garden-- was what magnetized me to this place. It was the only place I looked at and the only one I was interested in living in. So I suppose it was already arranged in the realm of the imagination. But one still has to go through all the hoo-haa because we are on the Earth Plane.

I've been told that there are 25 rose bushes here. I haven't counted them yet, but I have begun to get acquainted with each of them. Even in August, some of them are blooming splendidly. 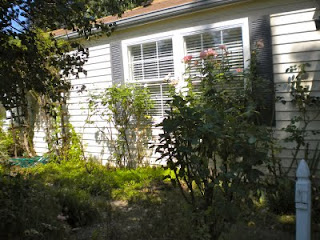 The woman who put together the front garden 30 years ago did a beautiful job. I don't know if she was the same person who planted the many varieties of ivy in the back yard. I am going to try to find that out from the next door neighbor, who has lived here for a long time.

Now there are many things that you can say about ivy. It's a beautiful plant and one sacred to Dionysus and no doubt other Greek gods. It's famous for being invasive. Yesterday I felt that there was about an acre of ivy I was dealing with. It has not been pruned for many years. I divested a cedar tree and a pine tree from great circles of ivy that wound far up their trunks, not a healthy thing for those trees--or for any of the other plants that wild Dionysian ivy is smothering. I am amassing great piles of cut ivy. Big as haystacks. Satisfying. 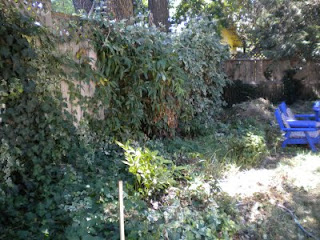 This morning I had an insight while drinking my coffee and thinking about the ivy.

Not only in the yard but also festooning the wallpaper of the kitchen!

There are even little decorative tendrils of ivy twining on the overhead light fixtures. Hmmm....someone really did have quite a passion for the stuff.

One thing is certain. That wallpaper has got to go. 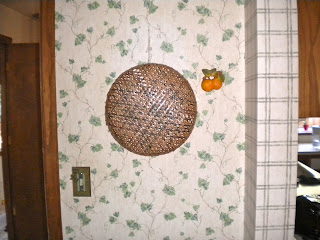 Dark outside now, the sound of crickets. Time to rest. Tomorrow in the morning there may be the sound of a dove.