Giving It All Away (or most of it)


I've downsized from a 2 bedroom house to a room in a house because I had the bright idea to give most everything away before I pop the cork.

So I got rid of many things. My younger daughter took what appealed to her and the rest I sold, gave to friends or trucked to Goodwill and Habitat for Humanity.

The result is that my stuff is all over the place now. I see my pretty pencil holder by the phone when I visit Tashi Choling Center for Buddhist Studies. My Chinese vase is at Linda's, beloved art prints and wine glasses at Frannie's, a turquoise pitcher at Barbara and Renato's and...well you get the idea. My stuff has been shared.

It felt exhilarating to do that giveaway. I think it's good practice for the moment when I will have to let everything go.  I've lightened my load quite a bit. Okay, I do have some boxes stored in the garage of a friend's house. I kept a small Tibetan rug, some books, objects that I use in meditation and prayer. Pots, a futon, linens.  It's a lot less than I've had for years, but it is still a collection of stuff.  Let's face it, one needs some to make daily life work comfortably.

I still am planning to head to Mexico this winter, after the sale of my flower cottage is completed, which it should be very soon. Meanwhile I am living with various friends until the end of October.

Currently, I am living with Linda. Her place is near an historic cemetery.  I often walk there, contemplating the state of the world, the state of my  heart and the transitory nature of life.  The state of my heart is generally salubrious. I feel good. But the subject of popping the cork is never far away. Friends are becoming ill, and some have died. We are stunned and saddened at the loss of them.

During a recent visit to San Francisco  one of my dear friends and I were sitting at the table eating some dinner. It was a beautiful summer evening. We're both Buddhists and Buddhists have no qualms about talking about death. Our conversation went like this:

"I don't know if I will be alive in 10 years," I said to her and she replied, "I'm pretty sure I will not be." From there we both acknowledged how strange and inevitable it was to confront the truth of our mortality.  I know that  I am somewhere towards the end and that gives everything an edge.

P.S. I read a wonderful book recently by Anyen Rinpoche called Dying with Confidence. It's a guide to preparing for death from the Tibetan Buddhist perspective. I recommend it.

To change the subject ever so slightly-- moving the veil from one side to the other-- how about the topic of living with confidence? It seems easier with age. I feel a lot more confident in my 70s than I did in my 30s or 40s or 50s. I've already digested a great deal of experience and some things have lost their glamour. Am I jaded, world weary, or it is just because I've been around the block quite a few times? Yes. And my varied life experience makes me appreciate the spiritual essence of human life even more. 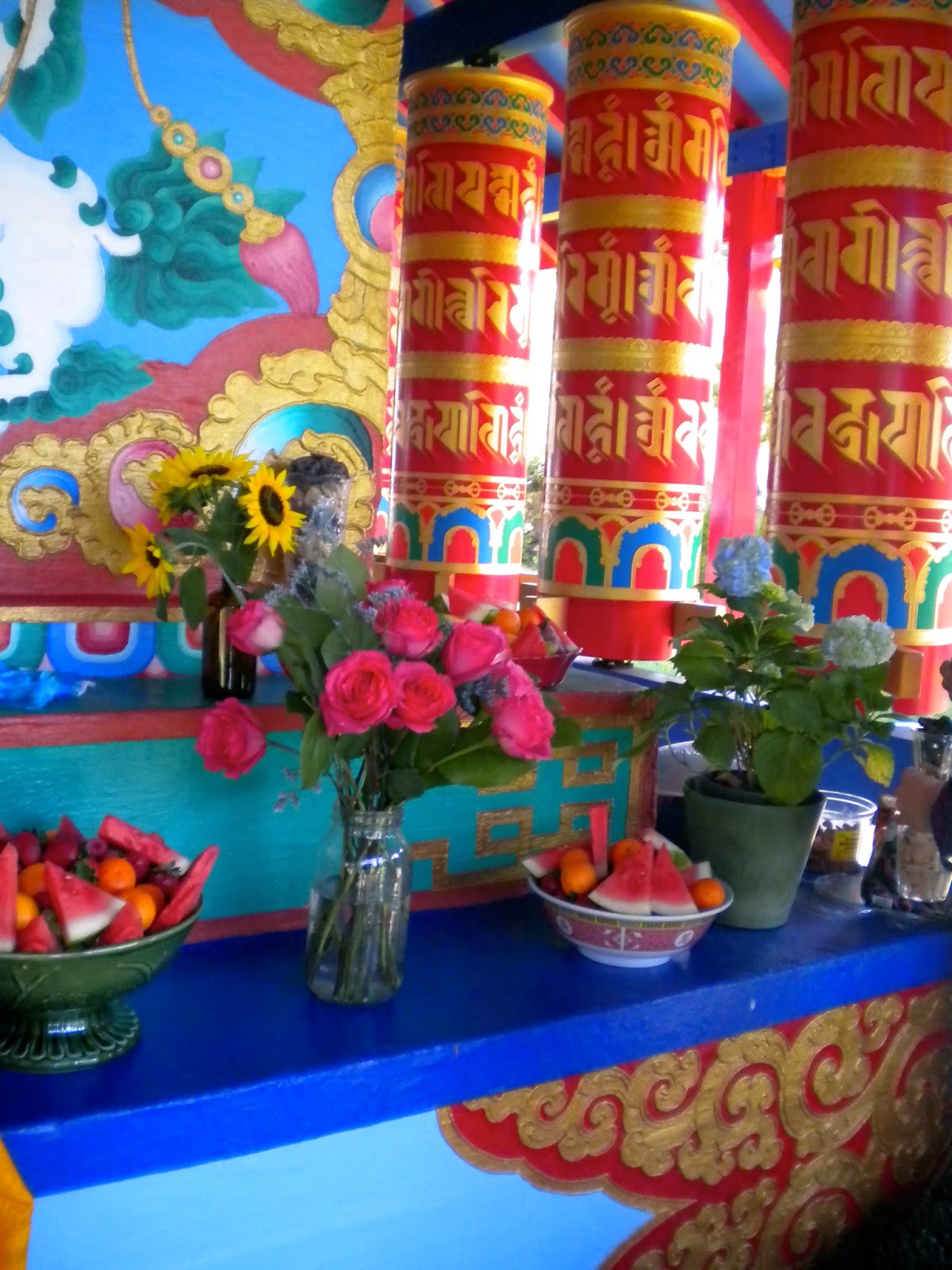 It's a paradoxical business, aging. As the body begins to dismantle itself in one way or another, the spiritual aspects of being emerge more fully.

Most days I think, "If only I were more like the Dalai Lama."

Now there's an elder worth emulating.

Oh, that's it for today. If I keep on writing, I will just get preachy and that is so tedious. How about this: by the time one is older, one's character is fully developed, or one is a character--or both.

The sacred and profane
danced in the rain
and there were times when
they looked quite the same!

How's your end of summer? It was delightful here today. Delightful.
Posted by Gaea Yudron at 9:30 PM 1 comment:


My Montana friend and yoga teacher Cache Hartzell posted a link to an interesting article this morning.

The prize-winning poet featured was W.S. Merwin, who has had a long, distinguished career.

"I think of one of my greatest heroes, (William Butler) Yeats," Merwin says in the interview. "He wrote at length - although nothing of Yeats is too long - about old age. He came to it with real anger, as though it was an outrage."

Merwin's attitudes about aging are different from those of Yeats.

Merwin says,  "I think of old age as being a time like the others. It has its revelations of its own that you can't come to any other way. I don't have any of those feelings Yeats had at all. I accept it with a certain amount of curiosity."

It is cause for celebration when humans remain vitally engaged in their gifts and the work that brings them joy, no matter what age they are. Merwin is an outstanding poet,  passionately engaged in writing poetry in his late eighties. Hallelujah. That enriches each of us, even if we never read any of his poems.

But back to that headline, which proclaimed that he "still" writes well into his eighties. Is this surprising? Not really, unless you are one of those who expects aging to equal complete disintegration of all talents, interests and passions. May Sarton, W.B. Yeats and Stanley Kunitz are just a few other poets who lived long lives and continued to write in their old age.

Many, many human beings continue to thrive, flourish, create, share and contribute in marvelous, rich ways though they are truly Very Old. Is this surprising? No, but it is wonderful and I sure wish that the majority of people in our culture would wake up to the truth that the vast majority of older adults are healthy, full of life experience and capable of wonderful contributions to family and society.

Right now, it is not that way. Instead, we as a society believe that if an old person is "still" dancing or or "still" creating gigantic welded sculptures or"still" doing complex mathematical equations in late life,  they are an anomaly or an exception. How sad, this belief.
Old people are expected to sit back, shut up and stay out of sight. How sad to see the way that so many older adults collapse into noxious stereotypes about being old and begin to embody them. What a gigantic waste --all that soul, love, creativity, life experience eroding from disuse. May this shift, and soon.

This week, I read a couple of other articles about our cultural attitudes toward aging that I found interesting. One was posted on Facebook on the page called Confronting Ageism. It was written by Alice Fisher, who works in the office of a New York state senator, and who in her private life runs consciousness-raising groups for older adults, to help participants investigate ageism and create positive ways of confronting it. That's good news, don't you agree?

Apparently, they are creating a manual that can be used by others to create similar groups, and I look forward to seeing that once it is completed.

Fisher writes, "Ageism is an interesting prejudice. Aging is the common denominator for everyone who is born. If fortunate, we are all going to get old. We are all going to die. So being judgmental about people just because of their age, or their wrinkles, or their slower pace, is sowing the seeds for our own internalized ageism."

We have been educated about racism and sexism, but many of us are not very aware of what comprises ageism, either in society or within ourselves. It is largely unconscious.

Another piece that influenced me this week appeared in Ronni Bennett's Time Goes By blog. In this post, titled "The Soft Bigotry of Low Expectations," Bennett featured excerpts from an article from the Montreal Gazette written by Daniel Nonen. 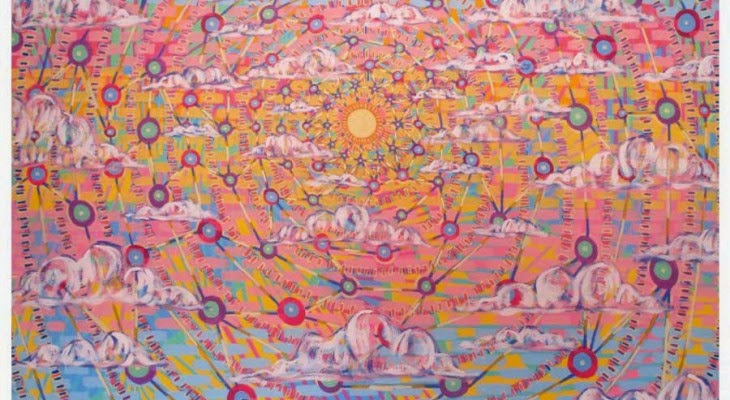 In his article, Nonen notes,  "It continues to be acceptable to patronize old people with low expectations...

“Old people need a liberation movement like the great North American movements of the past 60 years that are improving the lot of blacks, women, gays and lesbians..."

Later Nonen states,"...the most important accommodation that society should make doesn’t cost anything, People should simply start to expect more from old people. They should reject the 'soft bigotry of low expectations."

Yes indeed. Of course, that kind of change must take place within each one of us. Consciousness raising involves investigating our own attitudes and beliefs about aging and growing old.

What are your key motifs, beliefs or mottos about this time of life and yourself living through it? Where did they come from? How realistic are they? Are you collapsing into self-created stereotypes? If you were to define your main characteristics as an older person, what would they be?

I would love to hear back from you on any of these, too.


Sending warm regards to each of you. Here in Oregon's Rogue Valley, the wildfires are dying down and the air is clearing.

Gaea Yudron
Gaea, now 79, is a fan of positive, creative aging. Enjoy these moments, months, and years. Share your gifts. She has had a varied career as a poet, journalist, environmental activist, editor, and health care provider (hypnotherapy and rapid eye therapy). She is the author of several books. Her book Songs of the Inner Life explores the confluence of inner life and outer events. Check out reader comments or purchase a copy at amazon.com. Gaea's body of work includes some creative endeavors that remain unpublished or unproduced. This can happen. Good practice in patience and/or letting go. With composer Laura Rich, Gaea developed a musical revue on aging, A New Wrinkle. The revue contains a collection of exciting songs, among them Scintillating Secrets of the Older Brain, based on exciting new research on elder brainpower and Baba Yaga's Raga, which takes a mythic look at living long. Gaea co-authored a bestselling book Growing and Using the Healing Herbs (Gaea Weiss, Rodale Press). Her articles, essays and poetry have appeared in the Oregonian, Shambhala Sun, Mountain Astrologer, For Now and others.

Where to Find Us