Wake at Dawn with a Winged Heart

"Wake at dawn with a winged heart and give thanks for another day of loving.”--Khalil Gibran

Two days ago, the morning sky was rosy coral orange with violet accents. This morning it was a pale lemon yellow with gray splashes. Both were very beautiful. Now the sun pours into my little sunroom here, casting shadow patterns from elegant jungle cactus fronds on the brick wall. Ah, here it is, another day of loving. How marvelous!

My heart is very full and I am content. I am in the midst of creating some wonderful artistic/social change projects. The experience quickens me and fills me with joy. I am part of a beautiful spiritual community, many of whom I have practised with for 30 years. I treasure this. I have a gorgeous bouquet of friends, collaborators and allies, and two dear daughters. I live in a beautiful place. This is the season of harvest, both outwardly and inwardly.

"No one is as capable of gratitude as one who has emerged from the kingdom of night." -Elie Wiesel

It's taken decades to come to this deep contentment. I had my own version of prison and torment. But that has faded back in my experience and awareness. Life challenges along with the process of aging has changed me. It's been a process of surrender, acceptance and opening up. What a great blessing.

Today, I'll continue to work on a very funny song for my play A New Wrinkle. It's about Drugs and Medications--from LSD to Prednisone-- and it will be sung by Baba Yaga, the fierce archetype from Russian folklore. The play script is nearly done! Now comes Laura Rich and the musical score. Of course, today means a celebration of food for tomorrow's feasts. My daughter wants me to pick up a flat of very ripe persimmons for her at the Farmer's Market. Sometime today,I will be making some delicious fig/olive tapenade for one gathering of friends and some scalloped potatoes for another Thanksgiving gathering.

In the late afternoon, I am looking forward to some ecstatic movement at NIA, a marvelous dance form that combines movement from dance,martial arts and yoga. Through it all, love pours.

Grace isn't a little prayer you chant before receiving a meal. It's a way to live. --Jackie Windspear
Posted by Gaea Yudron at 7:49 AM No comments:

The Joy of Playing 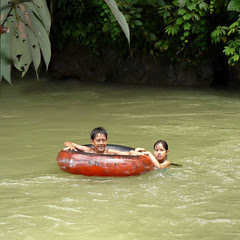 The playwright George Bernard Shaw once said "Imagination is the beginning of creation. You imagine what you desire; you will what you imagine; and at last you create what you will." I have that quote posted right near my telephone where it reminds me every day about the nature of creativity and the imagination, the play of bringing something out of nothing.

The renowned dancer Martha Graham insisted that "There is no satisfaction whatever at any time. There is only a queer, divine dissatisfaction; a blessed unrest that keeps us marching and makes us more alive than others." Hmm....I ponder her words from time to time, too. Yes, I recognize the blessed unrest and divine dissatisfaction that is part of creativity. But no satisfaction at any time? That just doesn't resonate with me at all. To me, there's a marvelous joy that's inherent in the play of creativity and it is something that is deeply satisfying. It's as if we are singing "I call you to me" to the empty canvas, the as yet undanced dance, the blank page ready for filling. And that experience of calling something up out of empty space is magical, playful, shot through with strands and sometimes streams or bolts of joy.

No blog post from this gal since mid October. Why? A whole lot of blessed unrest has been blessing my days. I spoke to groups about creativity and aging twice in October, once at the Ashland Food Co-op classroom and then again at artist Charu Colorado's OLLI class for older adults.

In the first class, I was talking about ageism, and when I finished, one attendee wanted to speak. "I hate living around those old people," he began. (He himself was fit and in his 60s). They are so fat and slow. In the time they take to get out of their cars, I can run around the block twice." He insisted he would kill himself before he ever got to that. When I pointed out that his comment was ageist, he seemed surprised and after a few moments chose to leave the classroom. The rest of the group was rather stunned and commented on how much they appreciated having the vivid example of ageism on the part of an older person toward other older people, and how ageism is something that one can internalize without even recognizing it.

In the second talk, I discussed why creativity is such a vital part of life, how it contributes to well being. I shared some of my favorite books including The Force of Character and the Lasting Life by James Hillman and two books by Gene Cohen, The Mature Mind and the Creative Age. I was very moved by 89-year old Charu's passionate and clear way of sharing about the value of creativity. "My physical eyes are not so good, but I can really see these days," she said at one point, describing the deeper vision that comes with a certain kind of open attention. Charu is a great example of someone whose commitment to creativity fuels her life and inspires others. Both talks were a lot of fun, and I intend to develop a seminar format so that I can continue to work with groups of older adults on creativity, wellness and spirit.

In late October, I had the pleasure of being in a group of 21 very creative people as we all became members of Artist Conference Network, a coaching community for artists of all kinds. There were photographers, graphic designers, singers, painters, writers, environmental artists, fabric artists, costume designers and book designers in the group. It was two days of creative action and joyful play. What a pleasure to share so intimately with people so committed to their creativity.

"I am a magical surprise!" That's the artistic statement which I discovered for myself that weekend. Sometimes I am a surprise to myself, of course. That is part of the delight and growth.

Right now, I am magically surprising myself with a variety of creative adventures--including developing a website for Sage's Play and finishing two songs for my play A New Wrinkle. I have the pleasure of meeting with my collaborator, the composer Laura Rich, to hear what she is doing with the lyrics of some of the songs, and imagineering some clips for You Tube--my goal is to have those up by the end of January.

I am grateful for the support and love I experience in this process. My work since April with my friend Melanie Marx, a wonderful life coach On Purpose Life Design has given me tools that have enhanced my life in many ways, including leading me to join Artist Conference Network.

Yesterday I had my second weekly coaching session with my ACN coaching partner. Tonight I am looking forward to a full-out gathering of the whole ACN group, which occurs every 3 weeks. It's an evening of delicious food offerings followed by a heady time of sharing our creative work with each other. As my friend Edeltraud often says, "Life is good."
Posted by Gaea Yudron at 8:07 AM No comments: