A different kind of role for actor Mickey Rooney 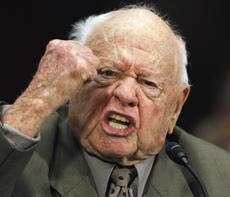 Legendary actor Mickey Rooney, now 90 years old, made news last week when he testified before the Senate Special Committee on Aging that he is a victim of elder abuse.

Rooney's emotional testimony put the issue of elder abuse on the national stage in a heartrending way. "For years I suffered silently. I didn't want to tell anybody. I couldn't muster the courage, and you have to have courage," Rooney said. "I needed help and I knew I needed it. Even when I tried to speak up, I was told to shut up and be quiet."

He told the committee, "My money was stolen from me, by someone close. My money was taken and misused. When I asked for information, I was told that I couldn't have any of my own information. I was literally left powerless." An April 5th court hearing will investigate charges Rooney is bringing against his stepson. The court filing claims that the stepson withheld food and medicine, acted intimidating and verbally abusive, and abused Rooney financially.

I am very glad that this venerable, vulnerable screen icon had the courage to testify as he did. As he pointed out in his testimony, he was afraid to speak up, and suffered silently for years. I hope that his testimony brings some positive change for the elders that continue to suffer abuse silently from family, friends and caregivers. Regular readers of this blog know that I enjoy highlighting the artistic, athletic and civic achievements of elders. To me, Rooney's testimony constitutes a brave achievement.

Elder abuse is a very virulent form of ageism. According to the American Psychological Association, an estimated 2.1 million older Americans annually become victims to physical, psychological, sexual, financial, or other forms of abuse and neglect. Ageism and elder abuse--they've got to go!
Posted by Gaea Yudron at 9:59 AM