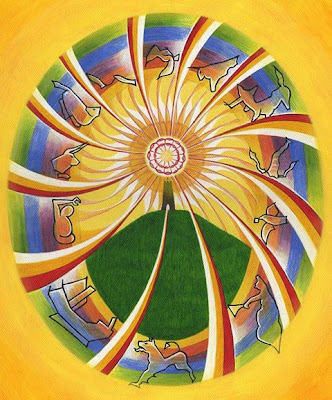 It's a sultry Sunday morning here, with predictions of rain.  Rain is unusual at this time of year in southern Oregon. I hope it does rain. That would be refreshing.  When I walked out into the front garden with my coffee earlier,  it seemed that the bees in the big tree across the street were really humming, much more loudly than usual. Maybe they are celebrating the solstice and full moon!

I am glad that we have a happy bee hive up in that tree, glad to hear the sound of the bees, woodpeckers, doves, blue jays, crows and various songbirds, glad for the big trees, those protective guardians of the place. I've been in this cottage for nearly 2 years and it is a wonderful refuge, a peaceful container for my life.

I went to a garden party yesterday at the home of Philip Booth and Laura Rich, the dear friend who has been my collaborator for the past 4 years as we develop A New Wrinkle, our musical revue. (What a glorious day it will be when we are sitting in the audience watching that revue be performed in its premier run.)

Laura and Philip have a beautiful place and their gardens are really lovely, full of flowers, herbs and many kinds of vegetables and trees. The group that gathered for the party was relaxed and amiable, the weather was great and the vegetarian food, much of which came from Laura and Philip's garden, was inspired.

We sat outside at several tables that were set up in the midst of the beautifully thick lawn. It was idyllic. I am glad for friends, the beauty of Nature, the warmth of this summer season, for life itself. Gracias a la vida! Thanks for this life. 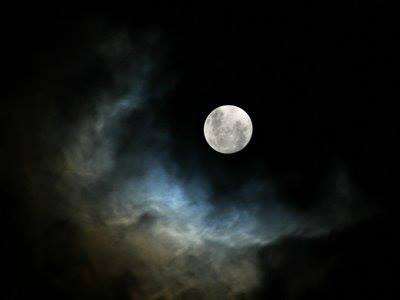 I love tuning into the phases of the moon. Last night, we had a thick cloud cover, so the nearly full moon was hidden. It may be hidden tonight, too.

But perhaps you will see it where you live. I hope you do.

I'm preparing for my upcoming book party on June 27th in Ashland and also am broadening my connections with others working in the field of positive aging. I love this part of building Sage's Play's programs and work--connecting with new folks, learning about their lives and the programs they are involved in is a great deal of fun, and forming friendships and partnerships strengthens our common vision as we develop new ways of engaging with aging.

An enjoyable New York Times article on relaxing into gray hair.
An inspiring article on a woman graduating from college at 85.

I find more and more articles these days about older adults who are wonderful role models of how to age happily. That's good news for all of us.

There is a big open space at the end of this post.....you can fill it in with your imagination....create what you want most for yourself, for this life, for this world.

Sending you a smile and wishing you a beautiful day.

Celebrating Songs of the Inner Life

My new book Songs of the Inner Life is now available at amazon.com, and will soon be out in Kindle format, too.

It feels very good to be sending this book out into the world. I am glad that I accomplished this part of my creative aging/follow your bliss/do what makes you happy/share your gifts work.

Now I have developed the Audacious Aging Kit and published the book. Next, it's finishing the musical revue A New Wrinkle and getting it produced and promoted.

There is plenty of reason to celebrate! I plan to start what will probably be a stream of celebrating with a reading and book signing in Ashland on June 28th. Other gatherings to share passages from the book will happen later this summer and fall.

I really look forward to these--they will certainly be fun, instructive and who knows what-all else. It is a new adventure.

I have received some emails from folks who tell me that I inspire them. How wonderful! If I do, I am glad. One woman wrote to say that I encourage her to continue to grow and develop. That makes me very happy. I want to inspire people and to encourage them to live into their dreams and share their gifts.

On another note, I have no marketing plan for Songs of the Inner Life. Should I be confessing this?  Isn't a solid marketing and promotional plan an essential aspect of sharing a book? Maybe, maybe not. For many reasons, I have not invested time and energy in developing one.

What was it like in the past, before the extreme promo buzz habits of today? Books went out into the culture through the author's activities and by word of mouth among readers, plus some newspaper coverage. That's the way it will be with Songs of the Inner Life with a splash of Facebook and LinkedIn thrown into the mix.

Of course, a book wants readers! I invite you to read about the book on amazon.com and if it strikes a chord in you, buy a copy, read it and spread the word about its stories and messages.

Have you ever connected with humorist Jeanne Robertson?  The link here will take you to her YouTube videos. She is in her 60s and had a successful career as a corporate speaker before she began to create herself anew as a humorist. I like many of her talks, including the one about not bungee jumping naked. See if they get you laughing. I often find myself laughing out loud when I watch her routines.

Ciao for now, with wishes that your summer be a delightful experience. I always love hearing from you via email, FB or comments on the blog. Thanks for keeping in touch and take good care of yourself.

Posted by Gaea Yudron at 8:53 AM No comments:


“The purpose of poetry is to remind us how difficult it is to remain just one person, for our house is open, there are no keys in the doors, and invisible guests come in and out at will.”--Czeslaw Milosz

None of us really is just one person, though these days, our culture does its best to flatten everything out, including the diversity of our personhood.

I suppose that many people think of themselves as just one person, and dismiss or suppress any evidence that there may be a host of characters hidden within, a fascinating collection of archetypes and personas.

Of course, it is convenient to appear as one person, and it may be reassuring, both to oneself and to others. But it is also rather dull in ways, don't you think?  All those  soul imprints and imaginative figures just sitting around like stuffed animals in a toy store, rather than having the chance to express themselves in the play of life.

I like to explore the archetypes and personas that pass through me or live in me. Poetry and memoir have been ways that I've walked into that territory. So has singing and performing. In each of these creative expressions, I find that various voices, personas and subpersonalities begin to emerge. Of course, they emerge in nighttime dreams, too.

Sometimes I like to play with them. Here, I'll share a recent jaunt with you. I got into it when I began to think about having some fun with the buttons in the Audacious Aging Kit I just developed. I went to visit photographer Helga Motley and she took a few pictures of them. There are others, too, but these will have to do for now.

Long ago, as you will recall, The Girl with the Pearl Earring was young and quite lovely. Wearing her signature earring and headdress, she was immortalized by the painter Vermeer. 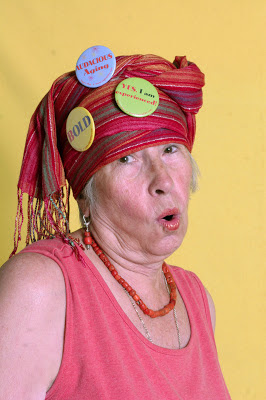 Decades later, she wasn't as serious as she had been in her younger days.

She had exchanged the pearl earring for a coral earring and put on another headdress entirely.

She pinned some buttons on her headdress in order to communicate a few things that were now important to her. One said BOLD, another said, Yes, I am experienced and the third said Audacious Aging.

She didn't think like that when she was younger. In fact, she realized that she had become an entirely different person from the girl she was when Vermeer painted her. 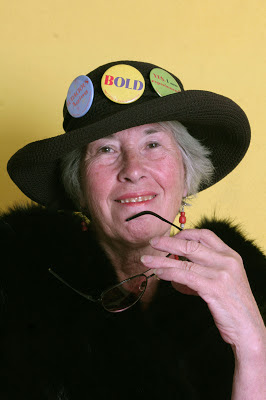 This is my friend Lola, sometimes known as Lulu.
She usually wears clothes that are much more outrageous, but she was going for a basic black kind of look here.

She gets me into trouble at times, as she has a rather forthright way of expressing herself. This is an understatement.

Don't let that classical get-up fool you.  She is anything but..... 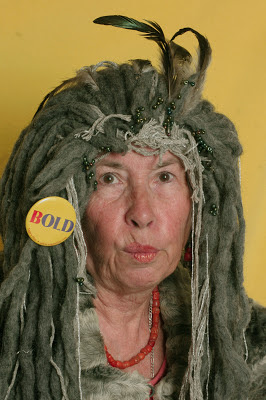 Baba Yaga, the magical hag, from Slavic folklore, is someone that I have been hanging out with for years.

Sometimes it's good to have a friend that is ancient, terrifying and quite powerful. She can teach you how to be that way, too, if she takes a liking to you.

I think that she is trying to smile here. She wants to look normal for the camera. She tries to adapt to current styles when she shows up in the modern world by wearing dreadlocks.

She usually lives deep in the forest of the ancient ones in a house that stands on chicken legs and twirls around and around, keeping an eye out on everything.

So as you may imagine, with that kind of house as a sign of everything else she is and does, she has quite a lifestyle.

This is not the way she usually looks, actually. It's almost as if she has had plastic surgery or something, though she is definitely not a being who thinks 60 is the new 30.

She is keeping her Mother of All Hags look under wraps. Probably for the best, at least for now.

Posted by Gaea Yudron at 8:14 PM No comments: