A good book is like a mandala of flowers 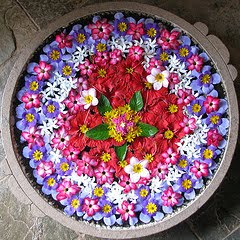 I don't read novels often. Memoirs are usually my preference. The urge to read a good novel does come over me once in awhile. It often seems to happen when I am traveling or visiting somewhere else. While I was in Hawaii, I picked up A Simple Habana Melody by Oscar Hijuelos from the bookshelf in my friend's living room. I was enchanted by it from the start, and found myself musing over some of the book's passages several times. That's a sure sign of love for me. Like this passage, which precedes the start of the story.

"Every sea wave was a clanging bell, the wind blowing from the west like a great and sonorous section of one hundred and seven violins, the sun at dusk was a glaring crimson cymbal, and the earth a kettledrum. On the horizon, beyond the water's edge, a choir had gathered--a million choristers in long silk robes singing from the balconies of a palace, hidden in a maze of distantly humming sea mists, and in the waters beneath the currents, a hundred dance halls, and a hundred pianists, and rooms and rooms filled with instruments and musicians at the ready..."

From that I knew that I was in for some heady music, both earthy and metaphysical. Set in Cuba in the 40s the book tells the life story of Israel Levis, a popular Cuban composer, from the vantage point of his later years. It's a marvelous evocation of an era when Latin music suddenly magnetized America and Europe. The main character is complex, a corpulent creative genius whose music has won him wide acclaim in his country and abroad. He is a man devoted to his mother, one who endured a life-long unrequited love because he was afraid to declare himself.

His late-life reflections on his own character, fears, accomplishments and difficulties are quite wonderful. All in all, this is a splendid, lushly written novel. Oscar Hijuelos is best known for his book The Mambo Kings Play Songs of Love, which I have not read. And I probably will not read it for awhile, mainly because I am still enjoying the resonance of A Simple Habana Melody, and re-reading parts of it again.

By the time I was ready to leave Hawaii, I was wondering if I could find a book to read on the plane. Knowing that the books on the living room bookshelf were fair game,I started browsing there. This time I found 13 Moons by Charles Frazier who is best known for his novel Cold Mountain. The book's first lines grabbed me with their ferocity and resignation. "There is no scatheless rapture. Love and time put me in this condition. I am leaving soon for the Nightland, where all the ghosts of men and animals yearn to travel. We're called to it...It is the last unmapped country..."

I could hardly believe my luck in finding a second great book right after finishing the first. Isn't there something grand about opening up a book at random, reading a few lines and knowing from the depth of the writing that yes, this book is going to be well worth reading.

13 Moons and A Simple Habana Melody are very different from each other, almost like yang and yin, one set in the tropics, the other set in the wilds of the American West. 13 Moons brings the world of Indian Country, the politics, lifestyle and natural landscape of the old American West vividly to life. The book has an epic scope, in terms of descriptions of nature, history and culture. As protagonist Will Cooper begins to tell his story, we learn that at the age of 12, he being an orphan, he was sent off by his relatives as a "bound boy" to run a remote trading post in Indian Territory. To help him along his way, he was given a horse, a map and a key to the store. Will Cooper's adventures are many. He lives quite a life, becoming a vital part of an Indian clan, acquiring a great deal of land and a fair amount of prestige, and witnessing a lot of changes. He also maintains a life-long love for a woman named Claire. This is a masterful, compelling book, melancholy, provocative and beautiful. I highly recommend these marvelous novels both of which tell their stories from the perspective of old age.

Meanwhile, it is still wintry here, though we have escaped the severe weather that some parts of the country have been enduring. I saw promising signs of spring the other day in a friend's garden where some purple violets were blooming.
Posted by Gaea Yudron at 7:28 PM