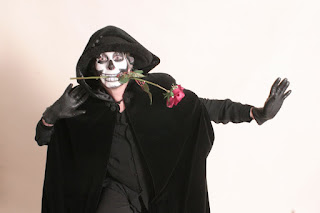 I spent two Saturdays recently with Helga Motley, a photographer I've worked with over the years on many projects.

This time we were focused on some images for A New Wrinkle.

These are a few of the photos she took at our second photo date, when I got dolled up as Death.


One of the songs in A New Wrinkle is titled Death is Right around the Corner. Actually it is a series of songs -- one of which is sung by Death himself. Death says: 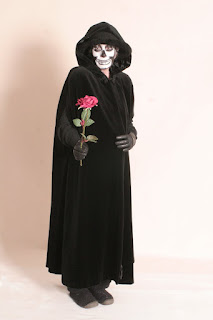 Death! it’s a hard job but somebody’s got to do it.

No one knows just when it’ll come and nobody’s gonna live through it.

Folks look at me with anguished eyes

When it comes to their last breath.

They flee from me, they will not play

Not a friend on Earth, no kids at home

I’ve got no one, I’m all alone

No wonder I’m not very gay.


I like some of the images we captured. What do you think of them?


The first time we met, we focused on tango photos. Our models were Clay Nelson and Ann Berry. There is a song titled Sex after Sixty in A New Wrinkle and it debunks the myth that older adults are uninterested in sex and intimacy. What's sexier than tango? Not much.

And even though the song Sex after Sixty actually has a Carribean feel to it in the revue, the lyrics do mention the tango---

doing the tango and fandango
from here to Durango
with your well-seasoned mango!

You can take a listen to an mp3 of the song at our website, www.sagesplay.com. Lyrics are available there, too. 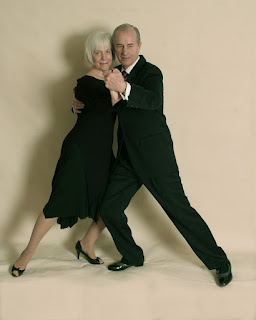 This coming Friday Helga and I are getting together again to get some pictures of Baba Yaga, the archetypal magic hag who provides some of the medicine and humor in A New Wrinkle. You can hear a nice recording of Baba Yaga's Raga on our website, too.

And if you don't already subscribe to our monthly newsletter, please sign up at the website while you're there in order to receive more news and updates, fun graphics and links.

Here's an item from the National Center for Creative Aging January Newsletter....I am not in this league, contenting myself with exercising at the Y, taking some walks in nature and dancing. But more power to Mr. Finch and all older athletes. Here's the news item.

Greenville Centenarian Wants to be the Fastest Man Alive

Bill Finch turned 100 last week, but he still runs a mile twice a week and plays badminton. Finch does not have a secret for his longevity, but has been active his whole life. When he worked, he ran at least one mile a day before breakfast and has continued to pursue an active lifestyle. He set the national record for the 1500 at the age of 96 and plans on running in the National Senior Games in Cleveland by which time he will be 101. “I hope I keep living as long as I’m in good health” said Finch.

Meanwhile, violets are blooming in this unseasonably warm and dry winter. Hoping we get more rain soon.
Posted by Gaea Yudron at 8:37 PM