The Artist's Life: Blessings of Creativity 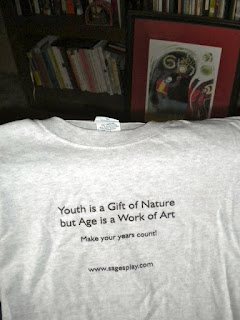 I often go to bed early, so waking before dawn is not so unusual for me. This morning I got up at 4am with a head full of ideas. Starting the day early is normal, but waking with a flood of ideas does not happen every morning. Should I be thankful for that? Probably so. And I'm thankful too for the ongoing exhuberance of my creativity.

Many creative ideas are brief visitors. They just pass through on their trajectory as they seek some artist who has an affinity with them. Some of them do stick around though in order to be womanifested.

This morning I met with a gaggle of ideas for creating T-shirts, baseball caps and mugs with positive aging slogans on them. I was thinking of them as perks for donors who contribute to the fundraising campaign that we'll be mounting at IndieGoGo soon.

I already developed one T-shirt that says YOUTH IS A GIFT OF NATURE BUT AGE IS A WORK OF ART...Perhaps I should do more of those, I thought. How about a t-shirt that says AUDACIOUS AGING or BE BOLD! The B in bold should be a different color in order to bring the idea that one has the choice be bold in aging. I really like the idea of creating objects with positive aging remarks on them. Should we also develop a little book with photos and lyrics from A New Wrinkle, as Frannie suggested? Hmmmm.... 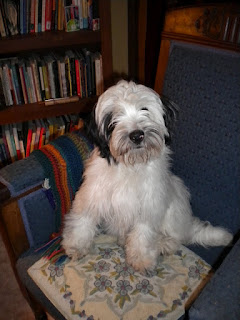 
My daughter's puppy Samo stayed overnight. Now my house looks the way a place looks when there's an active toddler around--toys and a half chewed up cardboard box are strewn all over the floor. Samo's resting on the couch at the moment. When it warms up we'll go out into the garden and play out there for awhile. It is delicious to have an animal friend in my life again after more than a decade without any pets. I enjoy her visits-- though so far I have no urge to get a dog of my own.

During the last month I engineered three photo shoots of tango dancers, Death and Baba Yaga, to be used for publicity for A New Wrinkle. I really enjoyed getting dolled up as Death and Baba Yaga. Stepping into various personas and archetypes is a great deal of fun. What about doing it on a regular basis? a voice within me is saying. Hmmm....

I've returned to do considerable work on the script for A New Wrinkle, after a great session with my old friend playwright Carolyn Myers. I changed the order of the songs and have done major rewriting on the connective between-song skits. I'm far more satisfied with the script now-- but I'm sure it's still in the development phase.

I have to laugh when I recall starting in on the revue in January 2008 and saying perkily to Carolyn that I was sure it would be ready for production by June. She arched her eyebrows ever so slightly, looked at me straight on and said, "I don't think that's very likely." Of course, she was right. I was naive, overly optimistic and just plain unaware of what it would take to work in a completely new medium, or what a sizeable project I had undertaken.

Thankfully, in spite of an old habit of impatience, I have been enjoying the learning curve, the people I've been meeting and working with and the experience of the revue's organic development.

The garden is another creative endeavor that I find rejuvenating and satisfying. Over the winter months, I've done pruning, digging up ivy roots, enriching the soil and I've even moved plants and planted a few new ones.

so much depends
upon

beside the white
chickens.

William Carlos Williams was a renowned poet and he was also a doctor in Paterson, New Jersey --in fact he was my doctor when I was a baby. When I began writing poetry myself at the age of 11, my father used to joke that he thought Dr. Williams had thrown some poetry dust on me when I was a baby. Maybe he did. Poetry has been an essential part of my life and imagination from early on.


P.S. I have posted some of my writing on the Sage's Play website, and you are invited to take a look at it if you wish. Selections include several poems from Carrying a Torch for the Old Flame, the introduction for Songs of the Inner Life and some articles I've written on aging. Lyrics for the songs in A New Wrinkle are also on the site, as well as 4 mp3s of songs from the revue.
Posted by Gaea Yudron at 6:04 AM