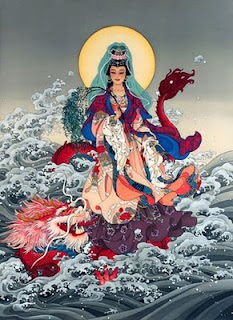 This beautiful image was posted on Facebook by one of my friends there. I enjoy connecting on Facebook, which at the risk of sounding hopelessly romantic, often seems to me like visiting an old-fashioned general store.

In Asia, the dragon traditionally symbolizes potent powers, particularly control over water, rainfall, hurricane, and floods. The dragon is also a symbol of strength and good luck. The year of the dragon is considered to be the luckiest year in the Chinese zodiac-- an auspicious time for the good fortune roll in! Are you ready for that? I certainly am.

Some days Facebook is more like a bouquet or a mandala. Friends post beautiful images and inspiring quotes. There are updates on people and events that the news media seldom covers, and I sometimes laugh out loud often at comments, jokes and revelations we share there. It's ironic that even though I think of myself as a Luddite, someone who prefers a slower, lowtech world, I enjoy social media and the Internet quite a lot.

Here's another beautiful image that appeared on Facebook the other day. It has its origin in "Old Moss Woman's Secret Garden." OMW describes herself as a Public Figure. I imagine she would have chosen Archetype if Facebook offered that option but it does not. I haven't written about my penchant for magical houses for over a year, but that doesn't mean my interest in them has been quenched in the least. And this certainly qualifies as a magical house. Of course I have become curious about Old Moss Woman-- who she might be, where she might live, and how she might be spending her days. I have been following the adventures and pratfalls of other Public Figures, notably the Republican presidential contenders and I find Old Moss Woman and her images of fairy abodes and mossy gardens quite a welcome re 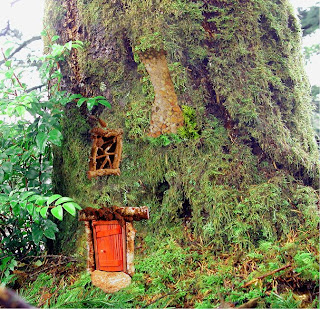 lief from the indelicate and sometimes alarming mess.

Tales of a Female Nomad

After my daughter rearranged some boxes of books she had stored in my tool shed I found a book lying on the shed's work counter. It was titled Tales of a Female Nomad: Living at Large in the World. Most of my travels have taken place in the realms of my imagination; a well-written travel story always appeals to me. I picked it up, brought it into the house and began reading it. Tales of a Female Nomad is a story of late life liberation. Author Rita Golden Gelman felt stifled by the life she was living, surrounded by glamorous celebrities; she told her husband she'd like to travel for a month. She hoped that the adventure would change her perspective. It did. Her marriage dissolved and she began 15 years of journeying in many countries. She was in her late 50s when she began. Her style of travel is refreshing and full of instruction. It's an enjoyable read. I recommend it. 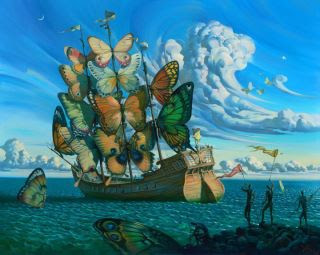 Ship of the Imagination

I found this image on Facebook too. A friend posted it recently. It's a painting by Vladimir Kush. I used it in my January Sage's Play newsletter. It captures the bouyant openness I associate with creativity. (P.S. You can subscribe to my monthly newsletter at the Sage's Play website.)

My biggest creative event this week was a meeting that took place today with my old friend Carolyn Myers, a prize-winning playwright and actress. Carolyn describes herself as a theatrical bigamist because she participates in both the Hamazons improv comedy troupe and a second troupe, Crackpot Crones. Carolyn's creative expertise has been indispensible since I began creating A New Wrinkle 3 years ago. Three years ago! And I am still not satisfied with the script. It is not ready to share with potential producers. The songs are all wonderful, but the script needs more work. Thanks to Carolyn, whose observations and suggestions are always so incisive, I have some fresh ways to work with what I started to call the "bardos between songs."

It's magical to bring art forth from the imaginal world into the outer world. I've started staging photo shoots of characters in A New Wrinkle. It's fun. It gives me a break from the kind of focus required for working on the script and it continues the forward momentum. At the suggestion of photographer Helga Motley, I went to visit a woman doctor whose nickname is Troll. Troll has a big costume collection, a well-organized roomful of costume items of all kinds. I borrowed a beautiful cape and very tiny hat and I'm looking forward to using them soon for shots of both Baba Yaga and Mr. Death. We took some tango photos a week ago. Slowly, slowly. Patience is a virtue as my Mother always reminded me. I never appreciated that reminder as an adolescent, but now the power of duration and persistence has become more clear to me.
Posted by Gaea Yudron at 8:27 PM