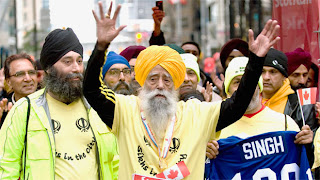 Since I started writing this blog, I have covered a variety of inspired and inspiring elders. Some of them are elders whose lives and work I already am aware of and others are folks I have found in articles in major newspapers. This week on the NPR site, I saw an article on a 100-year old man finishing the Toronto marathon. Here's a photograph of Fauja Singh after he crossed the finish line.

Singh, a British citizen born in India, took up running at the age of 80. 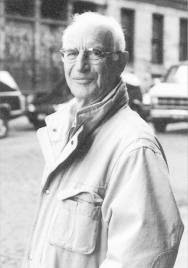 I was saddened to note the passing at 83 of James Hillman, a brilliant thinker, fascinating writer and Jungian psychologist whose book The Force of Character and the Lasting Life is one of my favorite books on aging. The New York Times obituary provides some details of Hillman's life. I spent months contemplating Hillman's writings as I developed Sage's Play and began to write A New Wrinkle. He was a major influence for me.

I wanted to review some of the people I've featured in this blog because lately people have been talking to me about how hard they find it to locate positive news about elders. I am very aware of ageist prejudice but I also manage to find wonderful stories about inspired and inspiring elders in major media.

In my October 23rd post, I mentioned 92-year old folk singer Pete Seeger appearing the other day at Occupy Wall Street. In June, I linked to Dominique Browning's great article on natural aging The Case for Laugh Lines, which appeared in the New York Times.

In May I featured the 82-year old British model Daphne Selfe. "Your face is your history," she commented. "If you have a few lines, it's your life that you've lived, and people should embrace that. Some [models] want to alter themselves and I hear talk about getting all this wretched cosmetic surgery done, but I don't want to do that myself as it costs too much, it might go wrong and what's the point? It won't stop you from getting old."

Also in May I mentioned a great article from the New York Times on 100-year old Bel Kaufman, author of Up the Down Staircase, a lively gal who likes to dance the mambo and tango. Another blog from May links to a New York Times article about comedienne Betty White.

In my April 8th blog, I covered the cross-Atlantic sailing voyage of the An-Tiki whose crew was led by 85-year old captain Anthony Smith. The rest of the crew of three men were between 56 and 71. They successfully completed their 2,800 journey across the Atlantic on April 7th when they reached St. Maartens on their raft made of pipes after 66 days at sea. The expedition was intended to raise awareness about lack of clean water on the planet and to raise money for WaterAid. The An-Tiki voyage--yet another example of late-life adventure and altruism.

In that same blog I featured a 91-year old retired dentist who took up body-building at the age of 85. I found out about both the sailing trip and the body builder in the Guardian, a paper from the United Kingdom.

However, the New York Times also has an editorial policy that favors the use of the word elderly as a generic way of describing older adults. Ronni Bennett in her great blog Time Goes By posted on October 25th a letter she wrote to NYT editor Arthur S. Brisbane protesting the Times' prejudicial use of the word elderly. As she pointed out in her letter, elderly is a word that implies frailty and does not apply to the vast majority of elders. Hopefully the New York Times will see the light and change its generic nomenclature to older adults, which is neutral.

Over the past two years, I've written about dancers, painters, sculptors, political protesters, explorers and writers. All of these folks are in their 70s or better.

I consider it great fun to explore the media and find positive, inspiring stories about older adults. This time of life is an adventure on both outer and inner levels.

How do you find the good news about inspired and inspiring elders?
Posted by Gaea Yudron at 8:36 PM