The Freedom of Nothing to Lose 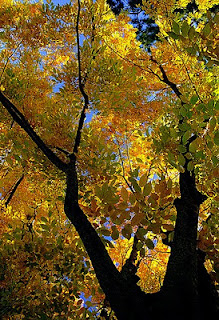 Steve Jobs's eloquent speech at Stanford University's 2005 commencement ceremony has been widely circulated since Jobs's untimely death at 56. Perhaps you've already perused what he had to say more than once. I know I have. Some comments are worth reading over and over.

"Remembering that you are going to die is the best way I know to avoid the trap of thinking you have something to lose."

I'm struck by how direct Jobs was in discussing the keen edge that death brings to human life. Death is a subject that is often concealed or denied in our society. But there he was at a celebratory commencement ceremony laying out the basics.

"No one wants to die. Even people who want to go to heaven don’t want to die to get there. And yet death is the destination we all share. No one has ever escaped it. And that is as it should be, because death is very likely the single best invention of life."

"It is life’s change agent. It clears out the old to make way for the new. Right now the new is you, but someday not too long from now, you will gradually become the old and be cleared away. Sorry to be so dramatic, but it is quite true." 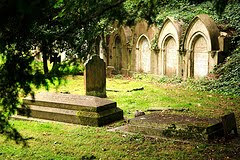 "Your time is limited, so don’t waste it living someone else’s life. Don’t be trapped by dogma -- which is living with the results of other people’s thinking. Don’t let the noise of others’ opinions drown out your own inner voice. And most important, have the courage to follow your heart and intuition. They somehow already know what you truly want to become. Everything else is secondary."

What passionate, honest and liberating advice. I join millions of others in feeling saddened that he's gone. He was a brilliant, independent artistic genius.

How many of us live with the fierce, joyful freedom of having nothing to lose? Of being unconcerned with the opinions of others? Of following one's own heart and intuition? I reflect on these questions fairly often.

There's a keynote for one homeopathic remedy (I don't recall which one) that goes "half dead on one side and buried on the other." I can relate because that phrase describes how I felt for many years.

I cared far too much about the opinions of others. I helped others to fulfill their goals rather than fulfilling my own. I didn't understand how to engage my gifts or offer them.

I recognize that this slow and late-flowering understanding about the innate freedom we all have was my own necessary way of maturing--though it would have been grand if I found my way out of the various confines that held me decades earlier. I wasn't ready for that yet or so it seems.

Now that I'm in the final stretch, I appreciate life as an exhilarating adventure in ways I never did earlier. I enjoy engaging in challenges that I would have dismissed as impossible decades ago. Impossible? Oh, really? Hmmm....let's see if that's really so.

I'm not saying I have no resistance to learning new things or that I flow effortlessly into the fresh assignments that appear as my work and life evolve. I can be found digging my heels in pulling back at the idea of learning how to use webinar technology or calling philanthropists I've never met to describe my musical revue and its funding needs. But if it is part of what I want to engage, I engage it after a bout of hopefully not too obvious kicking and screaming.

What a gift it is to have this freedom and the time and energy to engage in the deeper meaning and purpose of life. Work/play in creative aging and healing work is one part of that for me, and engaging in my inner or spiritual life is another. Doing and being--two aspects of one big adventure.

What about you? Do you feel more free in the ways that Steve Jobs described in his speech? What makes you feel free and fulfilled? 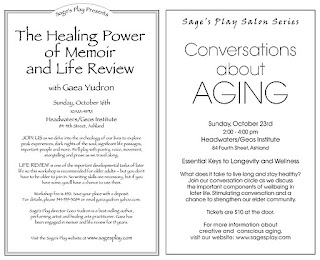 P.S. My first Healing Power of Memoir and Life Review workshop takes place this Sunday, October 16th in Ashland, Oregon. There are two places still available. This flyer gives some details. If you'd like to join us, call or email me to register.
Posted by Gaea Yudron at 8:56 AM