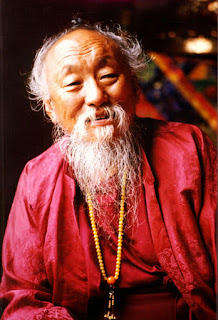 "Life's most awesome event is death...Death is inevitable, but how you die--terrified and confused, or peacefully and with spiritual mastery--is within your control."
--Chagdud Tulku Rinpoche

"Forgetfulness of your real nature is the real death;
rememberance of it is the true birth."
--Ramana Maharshi

In my early 30s, I became fascinated with Tibetan Buddhism and began attending teachings given by Tibetan lamas in Berkeley. My first teacher was Tarthang Tulku Rinpoche. I attended heady seminars populated with leading intellectuals like Charles Tart and Claudio Naranjo. Studying with Tarthang Tulku, I had experiences of non-ordinary reality that opened up my perceptions about what actually is real. I've written about some of this in my book-in-progress, Songs of the Inner Life, but here in this blog essay I wanted to share one particular event that had a profound impact on me.

One day, two young women who lived near Tarthang Tulku's Berkeley residence knocked on his door, distraught. They wanted to talk with the lama because their father had just died with a tormented expression on his face. His daughters found that expression unbearably painful. They came to ask if there was anything that they could do to help their father. Tarthang Tulku went upstairs and came back holding in his hand a round mandala made of several kinds of metal. He gave the young women the round disc and told them to put it on their father’s heart. He gave them a simple prayer to recite. The two women returned an hour later, very happy. As soon as they put the mandala on their dead father’s chest, they reported, his body relaxed, and the expression on his face changed to a peaceful one.

What changed the torment of a dead man to peace? Was it the metal mandala? The power of the lama’s meditation training? The daughter’s faith? Or some mix of all of that? These were the questions I asked in the months after I heard the story. And though no one ever gave me an answer that could pass for scientific, I didn’t care, for the event itself described the kind of science I valued. I wanted to find ways to engage in positive spiritual practices with practical results.

A few years later, I moved up to Ashland, Oregon with a man that became my second husband. We started a healing center. A year later, we were fortunate to help to found Tashi Choling, a Tibetan Buddhist center in the mountains outside of Ashland, which remains a vital source of Tibetan Buddhist teachings today. One of the teachers who visited Tashi Choling in the early days was Chagdud Tulku Rinpoche, whose photo is above. He was a truly beautiful, warm, humorous and profound being--a meditation master, physician and artist. One of the teachings I received from him was Phowa, a method of transferring one's consciousness at the moment of death. Chagdud Rinpoche became well-known during his life for sharing the Phowa teachings.

A group of us gathered together in the Tashi Choling shrine room and practiced Phowa meditations with Chagdud Tulku Rinpoche for nine days. It was a delightful time. At the end of the retreat, Chagdud Rinpoche tested each person for the results of the practice. With successful Phowa practice, the fontanelle at the top of the head opens and softens. A straw can be inserted into it. Some clear fluid or blood may come out, too. Every person in the group successfully displayed the results of the practice. Even the young daughter of one practitioner who came into the shrine room occasionally to sit on her father's lap had the fontanelle opening.

I have a great many things to be thankful for in this life, and my connection with Chagdud Tulku Rinpoche and the blessing of his Phowa teachings is certainly one. The closer I come to my own death, the more grateful I am for that time we spent together.
Posted by Gaea Yudron at 5:56 AM