Aging: Some Thoughts on Architecture, Place and Community 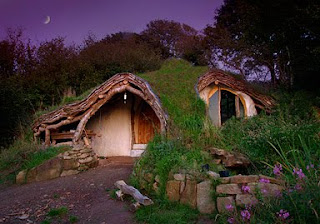 I'm your basic romantic type, and that extends to architecture and shelter. As I entered my 50s, I told my friends that I wanted to grow old living in the country in a teepee, dome or rustic cabin. Simondale, the beautiful (also inexpensively built, low impact) hobbit house in Wales shown in this photograph is my idea of a truly marvelous dwelling.

I've never lived in a teepee, but have enjoyed being at home in both dome and rustic cabin. My friend Mouna Wilson lives in a wonderful dome in the Colestine Valley where I myself lived in a rustic cabin for many years. I wish I had taken a photo or two of her place when I was there last week, as the full moon made its way across the sky window at top of the dome. I'll have to do that and post it here soon. 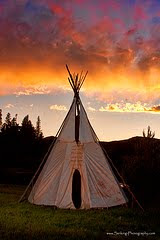 Right now, after happily living alone in Ashland for the past 13 years, I am sharing a place (still in town) with my friend Louise Pare. Louise and I get along well and it's been a good experience in terms of social engagement and affordability. But I have to admit, the impulse for country living is still strong in me.

Living alone or in community is a subject that I've been musing about quite a bit lately. According to the 2000 census, 30% of older Americans live alone and the percentage rises with age. It affects women more because they live longer than men, so for example, 57% of women 85 or older live alone. Poverty increases the impact for many elders who live alone.

Social isolation is a specter for many older people. You don't need scientific studies to know that the kind of severe social isolation that many elders live with is not good for your health, mental or physical. It makes sense to engineer a life that is socially engaged, and home is one place we can do that.

Because our aging population is increasing so quickly, there is a scramble to invent new ways to live in the later years. Buzz words include aging in place and aging in community. Most people want to live where they are planted or if they choose a new community place they want to be engaged with others.

(Being an educated person, you probably already know that only 5% of elders live in nursing homes.) Most of the over 60 population lives in their own homes or live with family or in elder co-housing, elder house share, the village movement and continuing care retirement communities, among others. The New York Times ran an informative article titled Living Together, Aging Together. Author Paula Span reported on several cohousing developments in California, Colorado and Virginia. I found both of these articles fascinating. It's great to see elders developing community together this way.

Co-housing options appeal to those who have sufficient retirement income. The ElderSpirit community in Abington, Virginia is the only one I've heard of that has included rentals for elders on fixed income in their model. These units are funded by federal housing money. I wish more co-housing groups would include options for low-income rentals. Not all elders can afford to buy into elder co-housing.

I found some interesting information on shared housing and home share options for lower-income elders. Increasingly, state and local agencies are investigating how to create affordable, community-based housing options. The National Shared Housing organization is a clearinghouse of information.

I am looking forward to meeting Raines Cohen, who contributed to the book Audacious Aging, and who with his partner Betsy maintains a website Aging in Community. Check it out for much more information on elder cohousing, village networks,ecovillages, intentional community and more.

What is your take on elder living arrangements--do you favor living alone or in community?
Posted by Gaea Yudron at 8:23 AM