The Harvest Moon Wakes Me at 3 AM 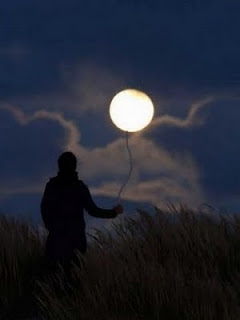 The full moon often pitches me into a state of non-ordinary reality. First, dreams that are like boats filled with the wind of imagination and creativity. Then waking at 3AM full of energy and a childlike delight, of the kind you can see in this wonderful photo by Laurent Laveder, who made a whole series of full and crescent moon photos with his children. When I woke at 3AM, I walked outside and put my face up to the moon. The stars were very beautiful.

"There they stand, the innumerable stars, shining in order like a living hymn, written in light." ~N.P. Willis 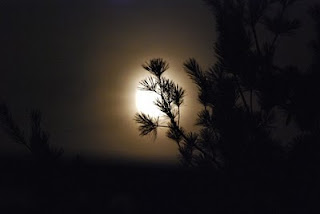 Now it is after 6 and the sky is lightening. And I can't say exactly how those three very light lunar hours flew away, as I looked at the sky, mused about my life and enjoyed the ardent, bouyant feelings the harvest moon ignited in me.

I am glad to experience a shift in the tides of the inner sea. For the past couple of months, I was feeling blocked about my musical play on aging A New Wrinkle because I was not satisfied with the script. I love the songs in the play, but the script itself has never felt right to me. The other day, I had a meeting with my playwright/performer friend Carolyn Myers (mentioned in an earlier post on her feminist comedy troupe Crackpot Crones) and she suggested that I might like the project better as a musical revue. Wow! As soon as I heard that, a weight that I've been dealing with for months lifted off me. Yes! This feels very right. Then I had a meeting last night with my composer colleague Laura Rich and she was very excited about the change and happy to compose more music. She agreed that the new format might actually be a much better way to present the material. So this morning I am refreshed and optimistic about going forward. I plan to write lyrics for at least 2 new songs and invent some narrative that flows around the songs. Yay!

Creating art is real work, and it can be hard work at times. It's not all marvelous dictation or initiation from the Muse. Having a community of support is very helpful. I went to two artist creative support groups this week, which was wonderful. I've been part of Artist Conference Network for a year. Our meeting was held in a dome in the country this time, and I could see the full moon in the sky window at the top of the dome the whole time. It was a very intimate, sweet meeting.

I went to another meeting of a group that uses the model of something that began as No Limits for Women Artists and is now called Artist Leadership Network. It was a powerful, intimate meeting. The two approaches are quite different in ways, but the intent is much the same. It is delightful and very useful to engage with other artists in a mutually encouraging way and I'm glad that's now part of my life.

Autumn equinox already. I am still hoping it is warm enough this weekend to swim at the hot springs.
Posted by Gaea Yudron at 6:02 AM