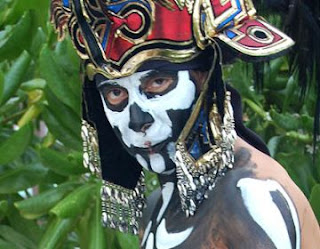 “I went to the woods because I wished to live deliberately, to front only the essential facts of life, and see if I could not learn what it had to teach, and not, when I came to die, discover that I have not lived.”--Henry David Thoreau


Someday I'll be a weather-beaten skull resting on a grass pillow,
Serenaded by a stray bird or two.
Kings and commoners end up the same,
No more enduring than last night's dream.
~Ryokan

After an aha moment with playwright friend Carolyn Myers recently, I've been revamping A New Wrinkle, my production on the pleasures and predicaments of aging. The aha moment involved the possibility of moving the project from a musical theater format to a musical revue format, which I've decided to do.

That change solves problems that have dogged me since I started the project in January 2009--to wit, interesting character development and a compelling plot with the kind of dramatic impact needed in theater. Although I did make progress in those areas, thanks to the help of Carolyn and other skilled dramatic writers, I was never very satisfied with the overall result.

It seems I am much better at writing songs. I love the songs I've created so far, and it makes so much more sense to put the material out in a musical revue format. My composer colleague Laura Rich got very excited when I told her the news. "I think it will be even better this way!" she said with enthusiasm. Of course, that made me glad, because I needed her to be enthused about the change and interested in composing music for some new songs, which I will be writing to cover important topics that had been dealt with only in the play script.

This week I'm working on a song about death. It is a good time of year to do it, with Halloween and Day of the Dead already in the air. Lately I imagine Death as a Mambo King, quite attractive, with a long cloak and a big standup collar. I hope my as yet unnamed song about death is as good as some of the other lyrics I've written, which Laura has composed such great music for.

I've been wanting to get some of the songs in A New Wrinkle recorded with singers and at least piano accompaniment and get clips of them up on You Tube. That will help with fundraising, too. But it hasn't happened yet. There's just so much a gal can do, even when she is a semi-reformed Type A.

Today is our first cool, cloudy autumn day. I'm taking off in a little while to have lunch with my younger daughter who just got accepted into graduate school. Later today, I am looking forward to going to NIA dance at the Y. In between, I plan to work on the death song. October Monday, the menu for the day.

I'm heading to Portland on Friday for a blogger meetup with Ronni Bennett of Time Goes By and other elder bloggers. I'm really looking forward to it.
Posted by Gaea Yudron at 10:45 AM