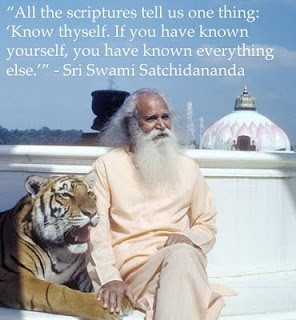 The lunar new year will be here in mid February. This will be the year of the metal tiger. I've had this photo on my desktop for two weeks, ever since my niece Heather told me about her yoga classes and gave me the link to the website of the yoga institute where she studies. Her teachers are students of Swami Satchidananda. I love this image and the quote. I love seeing Swami Satchidandanda with his hand gently resting on the tiger's paw.

That image of Swami Satchidananda and the tiger takes me back to a particular time when I was in my late 20s. I was living in New York and working as an assistant to moviemaker Conrad Rooks. A tall, slender blond man in his 30s, Rooks was reputed to be heir to a fortune. His wife, a beautiful dark-haired woman, was said to be a Russian princess. I never questioned this from a historical perspective at the time, but now I wonder, could she have been a Russian princess? Rooks had just produced a film called Chappaqua, which still has a small cult following.

In Chappaqua, a psychedelic foray into the world of consciousness expansion and spirituality, Rooks rounded up everyone whose presence might add to the artistic and spiritual flavor-- William Burroughs, Alan Ginsberg, some Tibetan lamas, Indian sadhus and various avant garde artists, and a bevy of Andy Warhol cohorts, who were much sought after in those days.

Rooks' office was on the ground floor of his townhouse. It was, from my perspective, an elegant place. There while I sat typing letters and answering the phone, as keenly aware of my menial status as any clerk in a Dickens novel, Rooks entertained some of the brightest stars in the art world with the casual familiarity that wealthy people command so easily. Occasionally the beautiful dark-haired princess appeared to talk something over with him. The two of them, for all their beauty and wealth, had an edgy, dissatisfied quality. I noticed it but never thought too much about it, because I didn't know anyone who was happy or satisfied in those days. From my vantage point, Rooks' life was terribly glamorous.

When Chappaqua was released, Rooks hosted a huge party at an uptown club. Hundreds of people, costumed with great attention to their overall artistic effect, pulsed like a colony of anemones on the dance floor while the band produced a mighty sea of sound. There was plenty of food and drink. People were happy to be there. And Rooks and his Russian princess, at the center of attention, seemed happy, too.

I was just a hired hand. The thought made me glum. If only I had money and connections like Rooks, who knows what great things I could do as an artist? While I was engrossed in these habitual reveries, a man dressed in a long saffron robe walked into the room, moving slowly and gracefully. His long silver-gray hair spread out over his shoulders, and his long gray beard flowed down over the front of his saffron colored robe.

I don't think he looked directly at me as he passed, but I remember his dark peaceful eyes. I had never seen any eyes like those eyes on a living person. The most remarkable thing about him was a golden light that seemed to radiate from his entire body. When I saw it, I wondered if I had perhaps smoked too much marijuana. The room seemed curiously still to me, even with the band playing. Everything was moving very slowly. Finally I managed to pull myself from timelessness to ask a nearby acquaintance, "Who is that?"

"That's Swami Satchidananda," the person replied. It seemed surreal to see such a being in the midst of that celebratory and world-weary gathering. When Swami Satchidananda finished his slow, luminous passage through the room and disappeared from sight, the party seemed very dark and smoky indeed. But the memory of the golden light he shed remained.

As Aleksandr Solzhenitsyn wrote, “Some things lead us into a realm beyond words . . . to revelations unattainable by reason. It is like that small mirror in fairy tales -- you glance in it and what you see is not yourself; for an instant you glimpse the Inaccessible, where no magic carpet can take you. And the soul cries out for it."

It was like when I saw Swami Satchidananda. The difference between Swami Satchidananda and the rest of the people at the party was palpable. Seeing him walk through the frenetic smoky nightclub with his saffron robes, silver hair, beatific, aware expression and golden light brought up so much in me. He was without a doubt someone who could be described as a holy person, something outside of the categories I was accustomed to. His appearance made me see how tawdry the party was. But in my mind, he seemed too far above me, too rarified; he came from another universe than the one I inhabited. I felt uncouth, too rude and rough to relate to a being like him. So his appearance scathed me, reminding me of how embroiled and confused I was.

That's what I am reminded of when I look at this image of Swami Satchidananda and the tiger sitting together so peacefully. And I realize in looking back this way that the years have been kind to me. I have had the fortune to have some of my roughness smoothed in the presence of spiritual teachers. Not Swami Satchidandanda, whom I never saw again. But other deeply developed beings. I have been blessed to breathe the rarified air of their presence. I mean it. It has been through their example that I have experienced something of the ineffable.

(Some of this writing is excerpted from my book-in-progress, Songs of the Inner Life)
Posted by Gaea Yudron at 7:03 PM