The Making of an Elder Culture 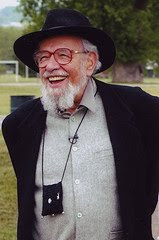 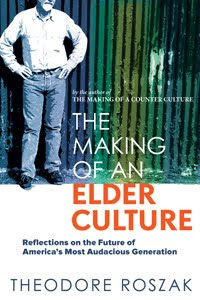 In 1969, Theodore Roszak published a book that became a classic--The Making of a Counter Culture. Roszak's new book The Making of an Elder Culture takes another look at the boomer generation, 40 years later. Yes, the author tells us, the youthful boomers were idealistic, audacious agents of social change. And now in their maturity they have the opportunity to become an even more powerful force for change. "The final stage of life is uniquely suited to the creation of new social forms and cultural possibilities," Roszak notes. And he continues a couple of pages later, "If boomers can change the self-serving entrepreneurial and neo-conservative values that now dominate our lives,they will have made a historic contribution not only to their own society, but to the modern world at large."

Now this is a possibility I myself earnestly support. Of course, Roszak is not the first author to discuss the unique responsibility and opportunity that elders have to care for and nourish culture. Rabbi Zalman Schachter published From Aging to Saging in 1995. Reb Zalman said in that book, "Elders are not 'senior citizens' who get gold watches at retirement, move to Sunbelt States, and play cards, shuffleboard, and bingo ad nauseum. They are wisdom keepers who have an ongoing responsibility for maintaining society's well-being and safeguarding the health of our ailing planet Earth."

So at least in that instance, Roszak and Schachter are talking about the same thing--the job elders have to nourish, lead and harmonize. But the two of them are coming at it in such different ways. The Rabbi's focus is on spiritual eldering, encouraging elders to embody wisdom. Roszak is much more in his head. Of course, the world is large and there is room for both Schacter's spiritual eldering and Roszak's proposed elder insurgency.

I will not attempt to cover the cornucopia of Roszak's spirited intellectual examinations on the future of government entitlements, sex and intimacy in later life, the imminent revolt of female caregivers, the predicament of aging alpha males, visions of great elder housing, and a nod to ecology. He is a cultural historian. Your head will be filled with many thoughts, and you will wonder about some of what he has to say, if you are anything like me. I mean, he rejoices over the declining birth rate and growing elder population as an expression of population leveling. Maybe so, and what about the other dimensions of it? What does it say about how we feel about the future of humankind, what does it say about our collective heart?

I guess I prefer the Rabbi's style. But I would love to hear from any reader who wants to elaborate on Roszak's book's high points, bogs and wild surmises. Did you read it and love it? Or maybe you're a fan of the Rabbi, too. Do tell.

Yes, yes yes, I want the boomers to enact positive social change via counter culture part 2. Yes, yes yes, I want to see elders define themselves as wisdom keepers and embody that. Yes, I imagine how much can change for the better when elders become spiritual leaders, creative lights and pragmatic activists. Yes, most affirmatively so.

At right: Photo of Rabbi Zalman Schachter
Posted by Gaea Yudron at 7:14 PM