At night, they were singing at the grave of Jose Alfredo Jiminez 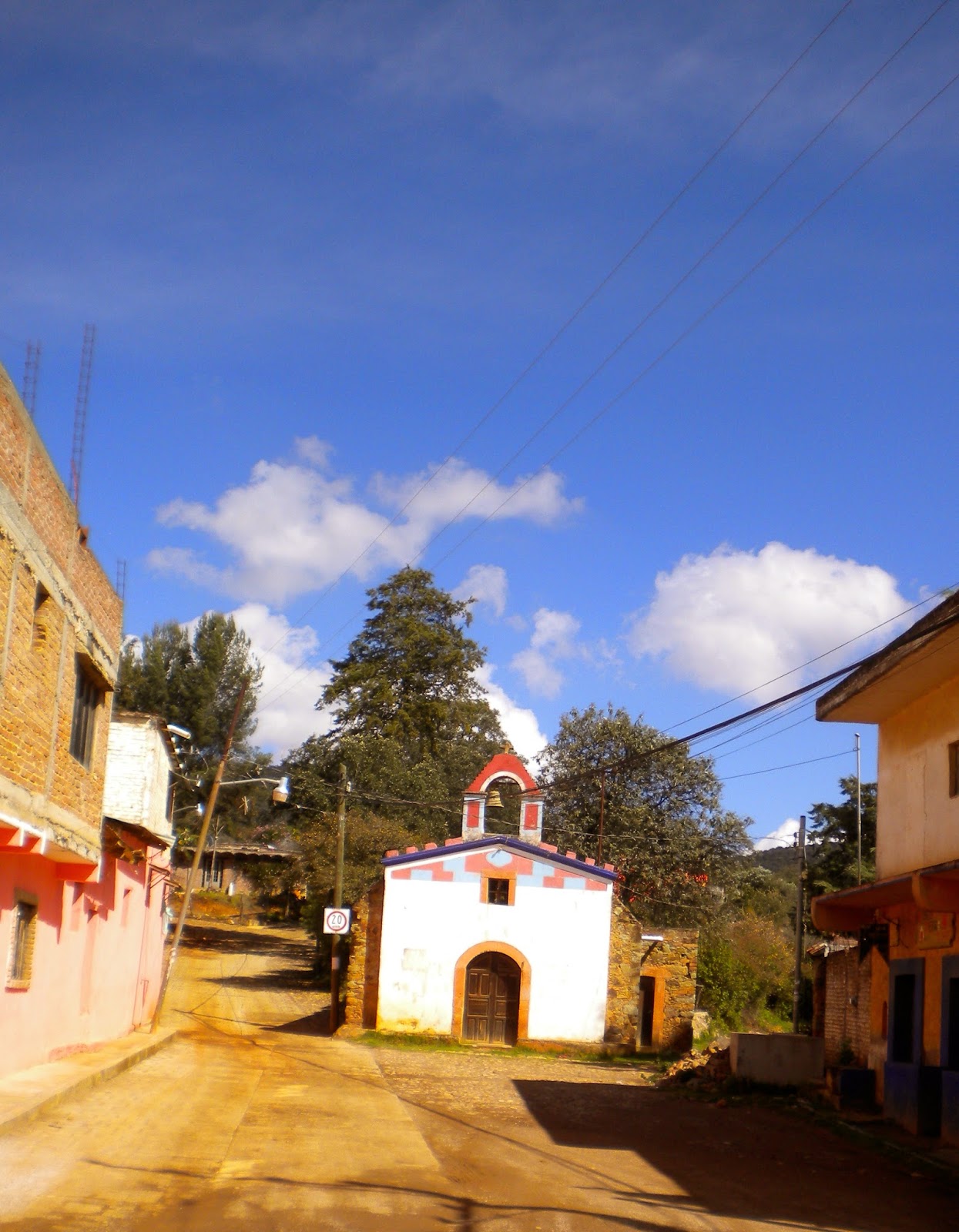 Domingo, 7am--let's start the day with a loud celebratory explosion! Not just one, but four of them resounded across the valley this morning.

I don't know what the occasion was but Viva la Vida! Lucy told me later it is a religious holiday, shaking her head in consternation at the mode of  observing it.

Yesterday a few of us took a day trip to Santa Rosa and Dolores Hidalgo with Alberto, an endearing tour guide who is also a teacher at Escuela Falcon, where I just finished three weeks of study in the Spanish language, so beautiful and confounding.

At our graduation ceremony on Friday, I was given a certificate announcing that I had completed 30 hours of course time. When Gonzalo called me up, saying "Lupita," the fans of my Lupita subpersonality all chanted Lupita! Lupita! Lupita! grinning at me and raising their arms in that gesture usually reserved for rock and sports stars. Yes, Lupita liked that. She can be a bit of a coyote type of mujer. But enough of Lupita.

Back to our trip. I found this small church in the village of Santa Rosa, so very different from the grand cathedrals of Guanajuato,  sweet in its simplicity.  I liked the small village of Santa Rosa. Small, with its fresh clean air and that country feeling. It felt good to get out of the city for awhile. 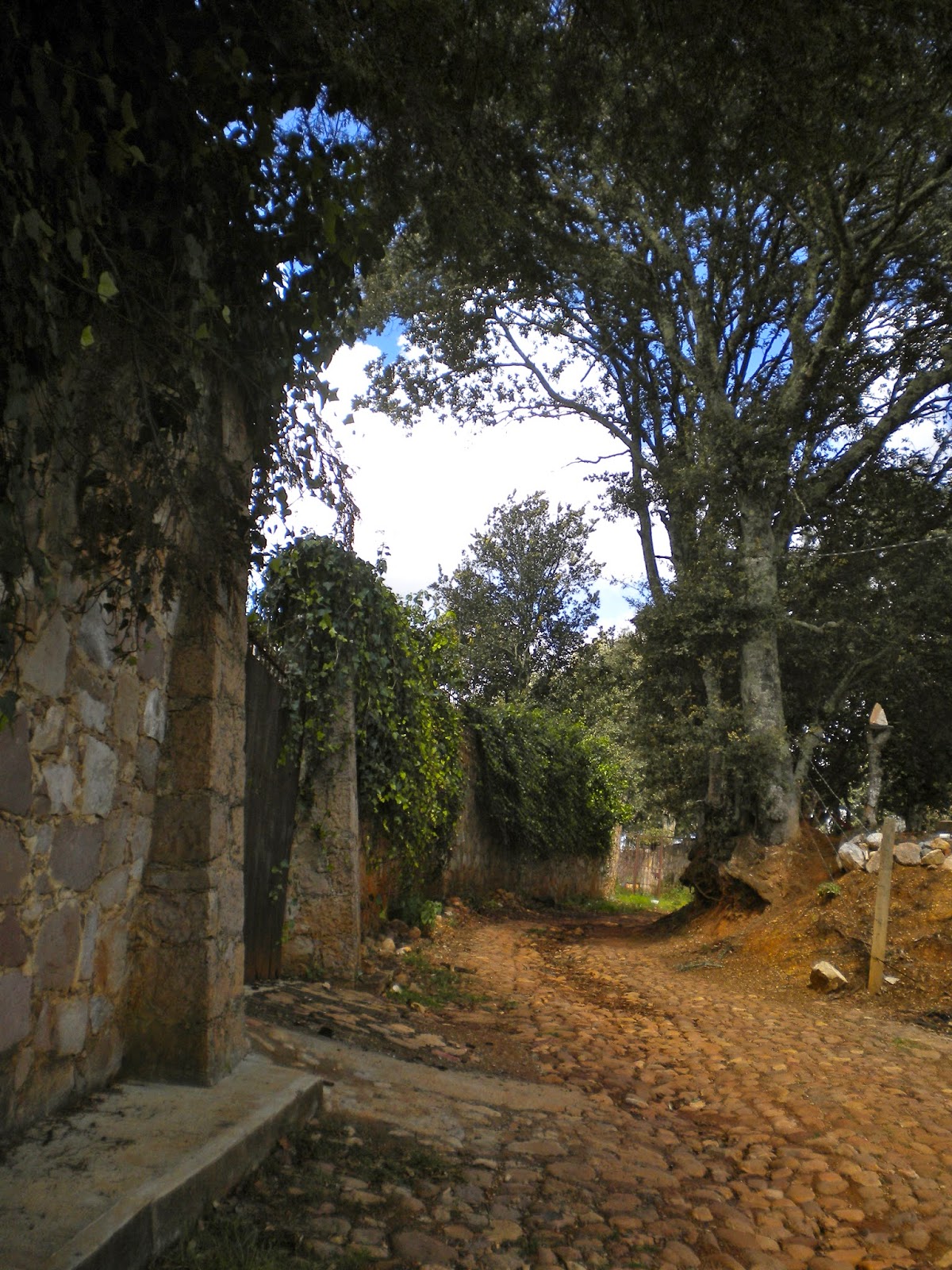 There were delightful back alleys in Santa Rosa. Here is one. There was also a big shop that sold elaborate ceramics that were very Italianate.  We stopped there to survey the many platters, jars, plates, house markers, and planters large and small, among other things. The ceramics producer did not allow photos, or I would have taken at least a few of the elaborate and beautiful jars, trays, pots, plates, etc.

In general, their style is not one I favor, even though the craftsmanship is excellent. I find them too fussy, except for a few designs. People compare them to majolica, but I don't find much resemblance.

We also stopped at another much smaller shop that sells locally made liqueurs, jams and other foods---all made by the women of the town and all fresh and delicious. I bought some jam for Lucy, and some piquant pumpkin seeds for myself. 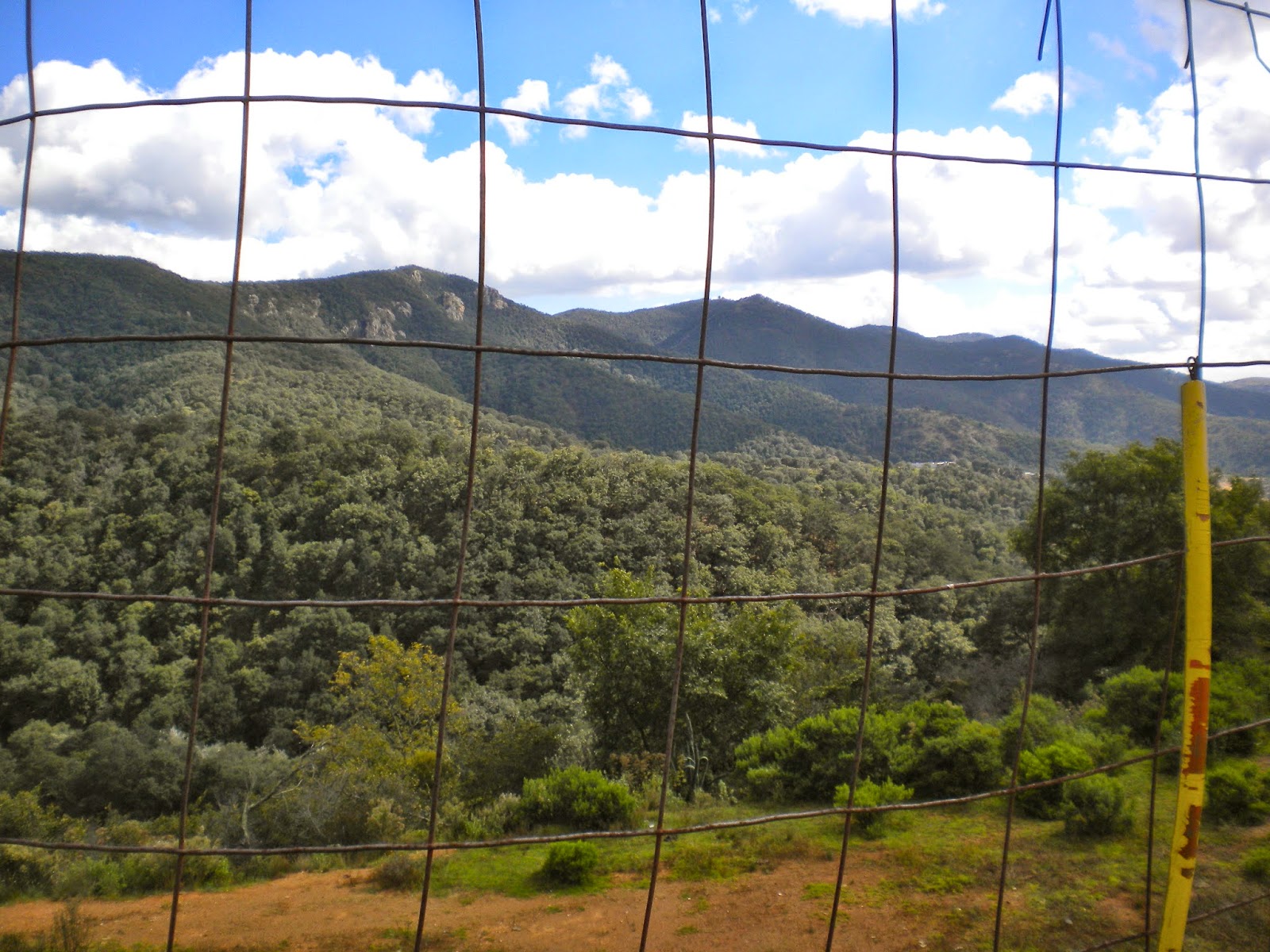 The road we took led us through an expansive, wonderful countryside of hills and valleys, dotted with cactus and small trees.

The Guanajuato area is in the altiplano or high plains of Mexico.The central Mexican plateau, also known as the Mexican Altiplano, is a large arid-to-semi-arid plateau that occupies much of northern and central Mexico. It averages 5,988 ft. above sea level.

The cities where I will be traveling next are both in the altiplano, too. Puebla is at 7,000 feet elevation and Oaxaca is at 5,000 feet. And to think, I was aiming for time at the beach. Hopefully, I will descend to sea level  and the oceanside in January.

Our group of day trippers had a meal at a restaurant housed in a hacienda on the road to San Filipe. I know this is going to sound as if I was just having an off day, but while I loved the hacienda, and while the food was okay, I would not rate it at the top of my list in terms of foods I have eaten since I got to Mexico.   I am usually not wild about meals in which meat is the main component-- unless the meat is cooked in a spectacular or fascinating way.  My lunch consisted of a large piece of chicken that was probably pounded thin and then cooked quite simply. It was served with thick cut fried potatoes and guacamole. The salsa was delicious and with some Victoria beer and interesting conversation, the interlude was quite enjoyable. The couple from San Francisco professed to like it very much. Their meal was much like mine, but with a large piece of tenderized beef.

I am not a restaurant critic after all, but simply a woman who seems to be getting a lot more enjoyment out of dishes like pozole, sopa azteca and quesadillas made with jamaica flowers and cheese.

We spent some time looking at the ceramics made in Dolores Hidalgo and again, I was not wild about their style, which seems garish next to the older Talavera designs made in Puebla, which I really do like very much. 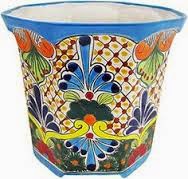 This particular piece is actually one of the nicer designs I saw there. Many of the designs are more like these jars below, which are fun and colorful if you want that look, but too garish for me. Even Lupita does not like them that much. 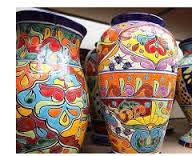 Oh, but before we did any visiting of ceramic shops, we stopped at the cemetery where Jose Alfredo Jiminez is buried.

Jiminez is a much beloved figure in Mexico. He was a Mexican singer-songwriter who was born in the town of Dolores Hidalgo in 1926. His many songs in the mariachi style are considered an integral part of Mexico's musical heritage.

Jiminez had no musical training and could not play any musical instrument, yet he composed over 1,000 widely sung and covered songs.  His songs are so much loved that people in large groups sing along with them in a soulful way, as we discovered later at the concert we attended. Even 5-year old children know the lyrics to some of his songs.

It is somewhat startling to walk through an old cemetery with all the customary angels and heavenly discourses, a crowded place filled with the overwhelming grayness of marble monuments,  and to come upon a festive scene at the location of a very large sombrero and rebozo. This particular display marks the grave of the beloved composer.

When we got to the grave site, we found many people of all ages assembled there. Many of the older men were convivial and inebriated. Actually everyone was quite convivial, no matter whether sober or drunk.

Elaborate wreaths of flowers decorated the grave. It was the day before the commemoration of his death on  November 23, 1973. He was only 47 when he died of cirrosis of the liver, the result of a life of heavy drinking.

Alberto said that the visitors would continue throughout the day, and so would the drinking. At 10 in the evening,  Alberto told us that people would be singing Jiminez' songs at his grave, and no doubt by that time the atmosphere would be even more likkered up.

We did not participate in that rite, but we did head to the big plaza that ornaments the center of Dolores Hidalgo, where a concert was to be held spotlighting 40 of Jiminez' best-known songs.

The concert was wonderful, once the first singer finished. She was a well-known pop singer with long curly blond hair and a style like so many of the current pop divas. I was underwhelmed by her voice and style. She did her best to engage the audience, with lukewarm results.

Finally, she was done and Fernando de la Mora, a famous operatic tenor, appeared in a tuxedo, every inch of him totally dynamic and arresting. From then on, I was completely entranced. What a gift to hear him sing the songs of Jose Alfredo Jiminez with his majestic voice.

He received a far warmer reception from the audience than the pop singer did. Soon the audience was singing back to him.

De la Mora was backed by a full mariachi band,  elaborately costumed and complete with guitars, harp, accordian and trumpets. Perhaps there were other instruments, too that I did not notice. It was a grand experience, thrilling to hear a voice of that quality in the person of a singer that seemed to be so elegant and warm.

Today, as I walked down the street of the ancient mermaids towards Calzada de Guadalupe, two burros grazed peacefully on the weeds in a nearby small field.  I've never seen them here before, but I have grown familiar with the pulse of life on this street, the young guy who heads out on his motor scooter every day, the two small dogs at the nearby tienda, one dirty and the other dirty and wearing a dirty sweater. I have grown familiar with the people riding their horses up and down the old street, with the young mothers hurrying their children down to school, the old women walking slowly up the steep incline.

As travel author Bill Bryson says,“To my mind, the greatest reward and luxury of travel is to be able to experience everyday things as if for the first time, to be in a position in which almost nothing is so familiar it is taken for granted.”
Posted by Gaea Yudron at 5:52 PM