A group of us who study Spanish at La Escuela Falcon went on an outing with Alberto, one of the school's teachers. Alberto is very sympatico and it was fun to have him as our guide. We drove about 1.5 hours through a landscape of rolling hills ornamented with cactus, passing through a couple of small towns along the way.

Our first stop was La Gruta Spa. La Gruta Spa is one of four hot springs in the Guanajuato region, and it is the one closest to the city of Guanajuato. It's a beautiful, tranquil place with many trees and flowers, and of course, the hot water. I am a dedicated lover of thermal springs and I could have stayed at La Gruta all afternoon, but was happy to be able to relax there for an hour and a half.

La Gruta has three outdoor pools fed by thermal hot springs. The hottest of the three is accessed down a long (well-lit) stone tunnel of water . Once you have floated or walked down the tunnel, you find yourself in a dome shaped cave with water dripping from the stone ceiling. 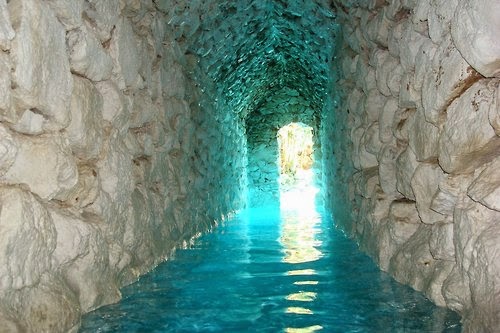 Ginny, Klaus and I tried out three of the pools and the tunnel. The tunnel was quite a mysterious experience, and the dome at its end is dark and womblike. Very relaxing to be in that hot water in the dark. I would love to return there before I leave Guanajuato, but if I do not have another chance to enjoy La Gruta, I will look forward to visiting some hot springs near Oaxaca soon.


Ginny and her father Brian are in my class at Escuela Falcon. They are both great people and they also have a wonderful relationship with each other,  so I was looking forward to meeting the mama of the family. On the day of our outing, Brian stayed at home with their four toy poodles, and Marsha came on the outing with Ginny. As I suspected, I enjoyed being with Marsha as much as I enjoy being with Brian and Ginny.

They live in Arcata, California and are traveling in Mexico for a couple of months. I recognize fellow bohemian types of people when I see them!

Yes indeed I do. They are an artistic, can-do family of people who make beautiful things, (they have fixed up and sold many houses), have horses and dogs and enjoy the extended family style of living. Oh, and everything is leavened with a good sense of humor.

Klaus suggested we eat at El Pegaso, one of four restaurants that Alberto recommended. It was a good choice. I just had fish tacos, which are not a remarkable way to discover how good a Mexican restaurant is, but I enjoyed them and the company of the group.

We didn't spend enough time in San Miguel for me to make definitive comments, but I did notice these differences between Guanajuato and San Miguel.

It is more elegant and upscale in San Miguel than in Guanajuato and it appeals to stylish Mexicans as well as to gringos. There are many beautiful antique shops, art galleries and clothing shops, all of which carry goods that are much more chic and expensive than those found in Guanajuato.

Alberto took us to a wonderful chocolate shop, which produces marvelous truffles and ice cream that is also quite delicious. I have seen nothing of this sort in Guanajuato, where the dulcerias sport delicious, but much more traditionally Mexican, types of sweets such as candied squash (marvelous), and others whose names and tastes I have not yet been introduced to.

San Miguel has a large gringo population. Around 20,000 American and Canadian expats live there.   The presence of so many gringos influences the tone of the town. Waiters and store owners speak English as a matter of course. Not so in Guanajuato. And the gringo influx has driven prices up, so that it is said that things cost twice as much there. Certainly housing does. 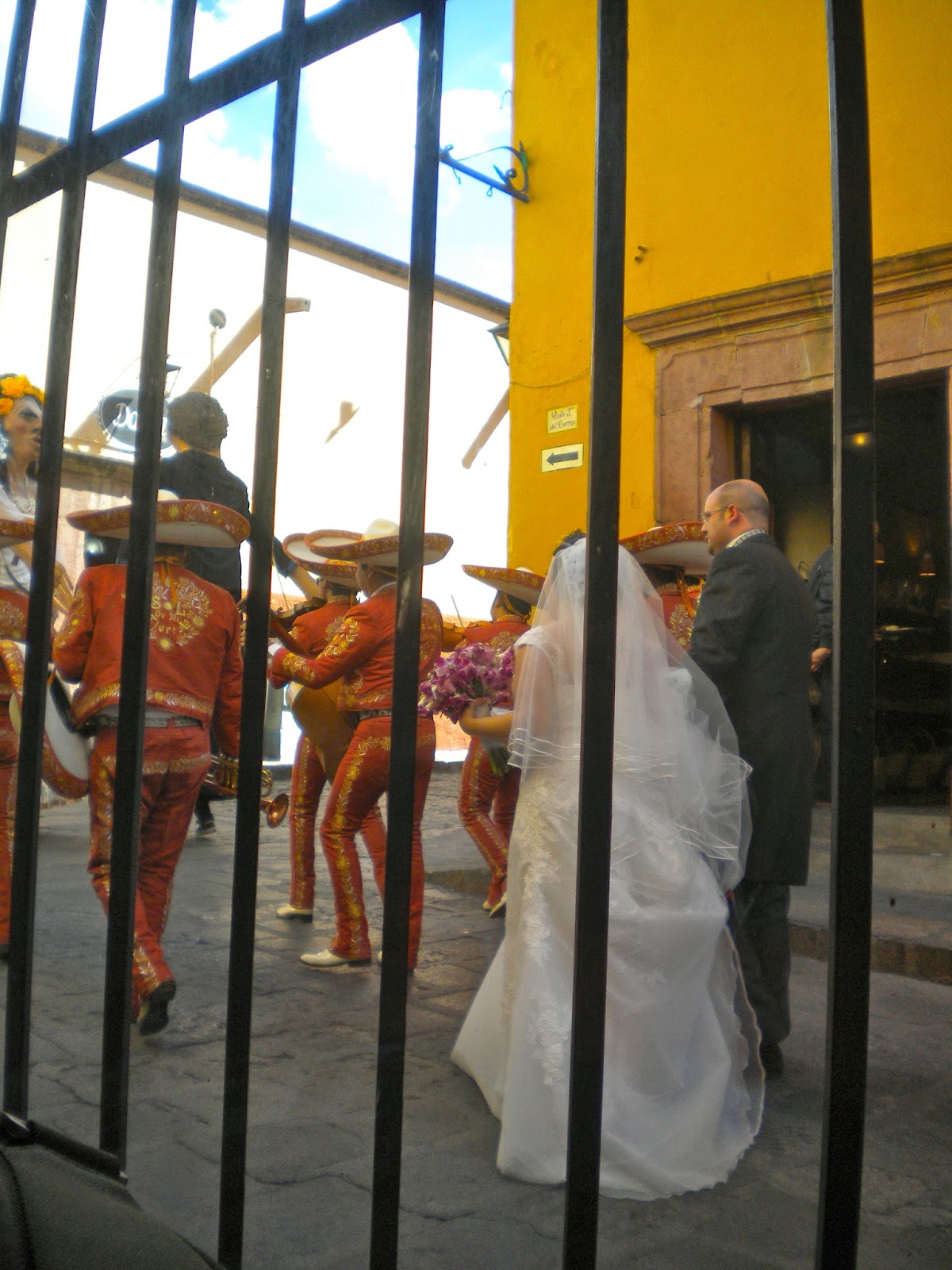 While we sat chatting and enjoying our lunch, a very fancy wedding party passed our window. A band in full costume was followed by the bride and groom and then by their friends and family.

Looking at the scene, Alberto commented, "That is a special wedding of rich people."

I certainly enjoyed my brief visit to the town, which is lovely. I decided to stay in Guanajuato for a month rather than in San Miguel because I knew Guanajuato would be less expensive and more authentically Mexican. But that doesn't mean I wouldn't enjoy spending a bit of time in San Miguel, among its wonderful arts and crafts, foods and clothing. Perhaps in the future, perhaps not. 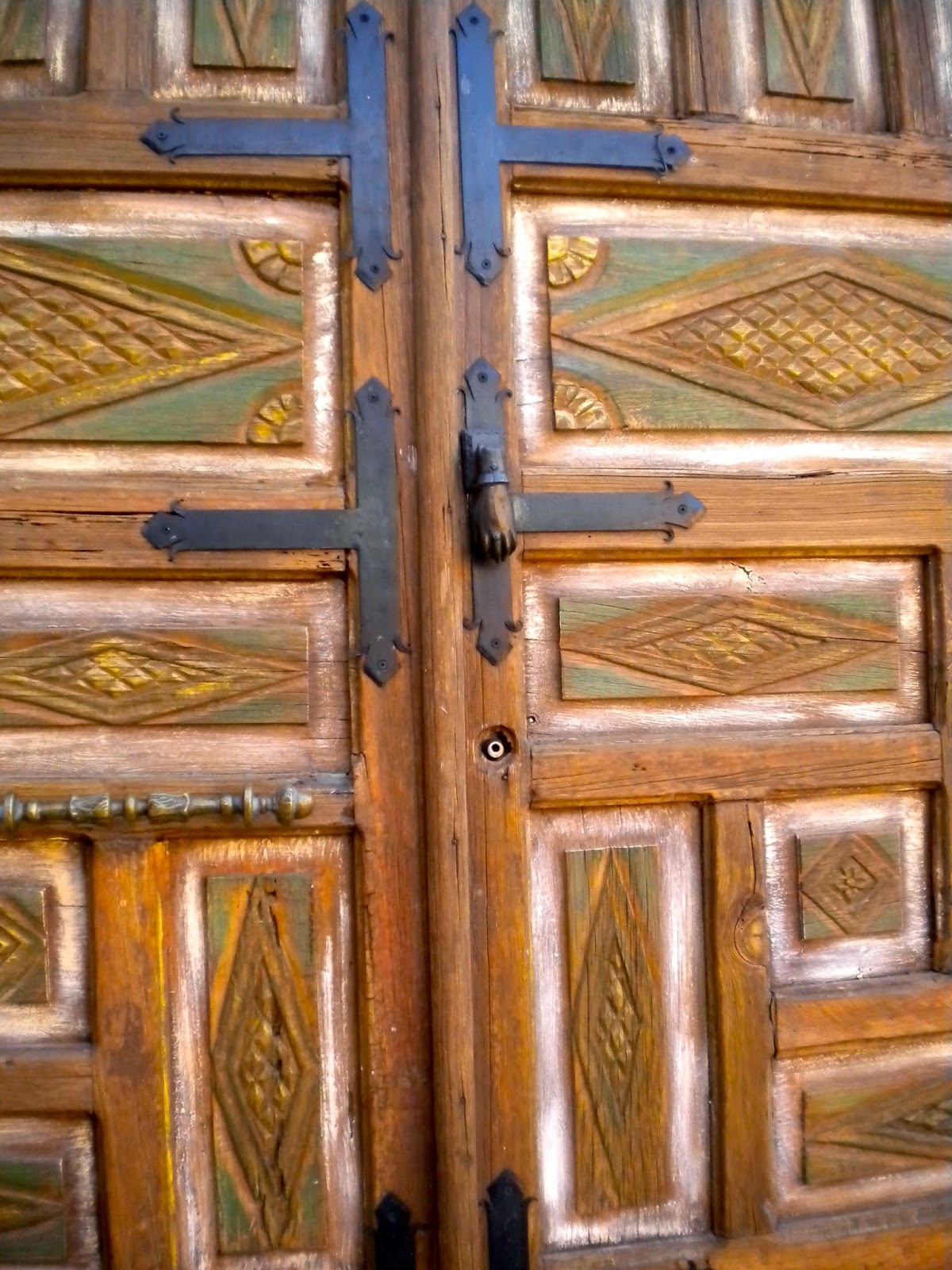 San Miguel has many old doors made of fine wood and ornamented by small hands and other decorative objects that serve as handles or knockers.

It's too bad that our visit to La Fabrica La Aurora happened at the end of the day when we were tired from the thermal springs as well as walking in the streets and the mercado.

La Aurora  is one of San Miguel's most unique destinations, a beautiful art and design center housed what was a textile factory at the turn of the century. Before its renaissance as an art and design center, Negociacion Fabril de la Aurora, known as La Aurora, was a leading manufacturer of premium cotton "manta" and textiles for almost a hundred years.

Like the hot springs and the downtown area of San Miguel, La Aurora is a place to which one could devote more time than we had that day.

Many paintings, much sculpture, beautiful crafts, ceramic flowerpots, and much more. Too tired to really give it the appreciation it deserves.

Marsha and Ginny said that they would return with Brian and Ginny's friend, who will visit soon.

What a beautiful day.

It was dark when we got back to Guanajuato. I was the last one to be dropped off. The relaxed, kind Alberto drove me all the way up the hill to Lucy's. I was grateful because I was quite weary and the idea of slogging up the steep hill in the dark was not appealing.

Today, I decided to rest before plunging into my third week of Spanish studies at the school.

I took a walk on the Panoramica in the morning, then went food shopping to the Mega in a taxi with Lucy.  I had some lunch and actually took a siesta. It was a quiet afternoon.

There have been other visitors at Lucy's in the past few days: a businessman from San Francisco who stayed for one night, a couple from Frankfort who left this morning and a musician/lecturer from Russia who is here until tomorrow.

Tonight others are rumored to be about to arrive for one night, though Lucy is acting as if they may or may not show up. Something about a family with a bunch of kids. I am instructed to move my bath items into the downstairs bathroom, which I can have to myself.

We are having classes tomorrow even though tomorrow is a national holiday--Revolution Day. I imagine it could be something like the 4th of July, Mexican style. Two big holidays in one month!

As they have said, the wise ones, "Where ever you go, there you are."  And it's true, here I am. What I notice when I look in the mirror is that I have aged in the past few months. Either that, or I simply have not been paying attention. More wrinkles, more sagging skin.

I am not complaining. I am noticing. One thing I love about Mexico is the way aging is accepted as a natural part of life. The desperate attempt to look young is not the main music here. And old people are treated with respect. What a relief.

As for the upcoming holiday, more news in the next post.

Email ThisBlogThis!Share to TwitterShare to FacebookShare to Pinterest
Labels: art and wellbeing, creative aging, perspectives on aging, travel in Mexico