The Matter of Life and Death

At 71 years, one may find that the subject of  life and death is a regular and ongoing contemplation. At least this one does. Many humans live to 90 or more these days, yet at 71 one wonders how many more years will be given to this particular life.

Part of the song goes:

"Late at night when in the dark
the whole world disappears
there are times when I can hear
the radiant music of the spheres
a resonance that’s calling me
from time into eternity."

I have been contemplating death for many years because I am a Buddhist. Buddhists have an ongoing practice of meditating on impermanence and the immanence of death. We don't know when death will come, the teachings tell us. Last night at 3:45am I spent an hour or two in the dark reflecting on my life and my certain passing from this world. This is something that pops up from time to time in my nocturnal experience.

I like lying quietly in the dark. I am glad to have the time and quiet to muse about dying. And I know that there is a world of difference between contemplating death and actually dying. When I gave birth to my second daughter, I thought in the midst of the oceanic and all-absorbing experience of birth, "Oh, this must be what dying is like, this extinction of everything external into the gigantic pulse of the moment, the sensation of being poised at the edge of life and death. "If only I could practice this experience a few more times," I thought to myself then, "I could become more skilled in letting go."

I didn't have the practice of birthing any more children, but I do practice what I think of as a sacred exit strategy. It's the Tibetan Buddhist practice of Phowa, in which one visualizes one's consciousness shooting out of the top of the head, the fontanelle area, and merging with the immeasurable light, in the form of the Buddha Amitabha. I've been fortunate also to have had Tibetan teachings over the years on the dissolution of the earthly elements at the time of death and various emotional//psychological experiences that tend to arise with these aspects of our letting go.

You don't have to be a Buddhist of course to recognize how important a territory death is, especially in the later years. Carl Jung once said, "Shrinking away from death is something unhealthy and abnormal which robs the second half of life of its purpose."  In this film clip, Jung talks about death as a fulfillment of life.

It so happened that yesterday my friend Diane gave me a DVD of Wit,  a movie starring Emma Thompson playing an intellectual scholar of the poetry of John Donne. This woman discovers that she has stage 4 ovarian cancer. We are witness to her experience in hospital during a radical course of cancer treatment, which has no useful effect on her cancer. We see  her pride, isolation, wit, humiliation, regret and sorrow. We are privy to the crisp impersonality of much of hospital culture. We share in her experience as she realizes that she is dying. This is quite a profound movie, wonderfully acted by Emma Thompson. I highly recommend it.

Isn't it a great puzzlement how we appear in this world from simple joining of sperm and egg, how we come in with particular gifts and limitation, live this life and then vanish, leaving our body behind?

When Allen Ginsberg died, I remember seeing a photo of him on his deathbed, right after his passing. This photo, which I could no longer find in my Google browsing today was published I think by some Buddhist magazine. Though you might find it strange, I found that photo comforting and generous. How like Ginsberg I thought, a poet whose life was so outrageous and provocative, to request publication of his deathbed photo in a culture so fearful of looking at death. I felt comforted by his generous last gesture to me, a stranger and a fan.

Everyone dies. Beauty, fame, wit, must all be surrendered up.

So it seems to me to be a great time for giving things away and practicing letting go. I am grateful to be part of the sage-ing community, as its founder, Rabbi Zalman Schacter, points out the importance of various later life tasks, including preparing for death. 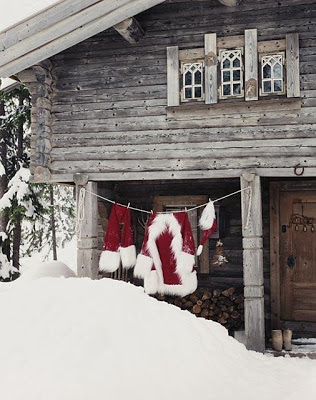 Of course,  it's not advisable to climb into the coffin while still alive! (I will be cremated however.)

These later years can be a time of fullness, deeper understanding, growth and healing. I am such a different person from who I was in my earlier years. Though far from sainthood still, I have learned a great deal about compassion and kindness.

This morning, pouring cream in my coffee, I am immersed in the world of the living.

What shall I do with these years? How shall I live, and where? I think about my friend Shari, who is on retreat in a monastery in Nepal. Retreat is a compelling possibility, as is moving to Nepal, a country so enriched by Buddhism.

But for now, I am sitting on the couch in my cottage in Oregon, looking at this photo of Santa's clothes hung up to air out on the clothesline of a charming old wooden lodge. I imagine Santa is sitting inside by a good blazing fire.

It's the holiday season and the winter solstice is approaching. This winter, some of the buzz is about the Mayan calendar shift. I think I will be learning more about this topic because next week at this time, I will be boarding a cruise ship that will take my friend Serena and I into the Gulf of Mexico and down to Mayan ruins in the Yucatan. The cruise organizers call the adventure the Mayan Galactic Alignment. I am the kind receiver of Serena's gift, being her guest on this journey. I imagine it will be pretty darned interesting.

Isn't life amazing, strange and wonderful? I find it to be so.