I like to imagine attending the yearly award ceremonies designed to honor elders in different fields. Can you feel how wonderful this would be, too? Having an Elder Hall of Fame that acknowledges the significant contributions of elders in the arts, science, the environment, philosophy, athletics, business, etc...It tickles me to imagine it coming into fruition. 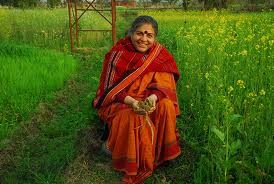 I have quite a list of elders I want to nominate for the Elder Hall of Fame. They are people I deeply admire for their passionate commitment to their life work. Dr. Vandana Shiva is one of them. At 60, she is still a young elder.

Do you know of her and her work? Let me tell you something about it, and in the course of that, you will understand why I admire her so. Perhaps it's best to start by recognizing the breadth and depth of her vision.  Well-known as an environmental activist and author of numerous books, Shiva is inspiring, a brilliant thinker and a tireless advocate for the wellbeing of the Earth and its creatures.

To me, it seems that ecological/-environmental issues are the main issues of our time. We utterly depend upon the Earth's integrity, diversity and health in order to continue living here as a species. Most of us are quite aware of how the  globalization of corporate power has affected the Earth and its creatures. This is the arena in which Vandana Shiva chooses to work --exposing how global corporations are plundering the Earth, and developing solutions for that depredation.

Vandana Shiva was born in Dehra Dun, India at the foothills of the Himalayas. Her father was a conservator of forests and her mother was a farmer.  Both parents were staunch supporters of Gandhi and Shiva herself espouses Gandhi's philosophy, saying "I have tried to be the change I want to see." This statement is simple enough, but when a human embodies it as Vandana Shiva has done, it is deeply moving. That is to say, I am deeply moved by her vision, her dedication and the profoundly integrative understanding she brings to the biggest issues of our era.

Before becoming an activist, Dr. Shiva was one of India's leading physicists. Troubled by what she calls the dark side of science, she decided to become a theoretical physicist rather than a nuclear physicist as she had originally planned.  If it were not for her enormous curiosity about social issues, she might have settled into a rather quiet life in academia. That was not to be.

The listing of her books, research and organizations she has created is long. She has received many honors and much recognition, and rightly so. She is described as an eco-feminist because she speaks to the inclusion of women. She has fought for change in the way we view agriculture and food. She created Navdanya, an organization that has developed native seed banks on 57 areas of India, as a response to corporate attempts to control what is grown and how seeds are passed along. Do you know how important an issue seeds are? Without biodiversity and free native seed exchange, we are imprisoned in corporate control of seeding, subject to dangerous GMOs and prevented from growing food in a natural, local way.

The Utne Reader) describes Shiva as "a one-woman movement for peace, sustainability and social justice."  I have to agree with that description. She is a person who has plunged into major social// environmental issues and applied her intellect and passion to creating solutions. I have only touched on some of her interests, involvements and accomplishments.

If you are inspired to learn more about her and her life work, you can Google her books or read some of her Resurgence Magazine articles.

If you wanted, you could even get more involved than that in her work to support global biodiversity,
small, decentralized and local agriculture other sustainability efforts. As is stated in a website devoted to her green work, "Ecological recovery cannot be based on centralized and globalised control over resources. It has to be based on the decentralized logic of Gandhi’s “ever-widening, never ascending’ circles."

Vandana Shiva: an elder worthy of praise and support. I nominate her for the Elder Hall of Fame.