Playfulness, Sage-ing and A New Wrinkle

Playfulness is wonderful because it lifts us out of mundane concerns and sets us free in a beautiful open field, where we have a chance to express ourselves spontaneously.

I offered a workshop on Playfulness and the Art of Aging at the Sage-ing International conference. Wow, was that fun! Over 30 people participated. The sharing we did on our childhood play experiences was marvelous, and sometimes very touching. We made faces, funny sounds, told stories, made believe in various ways and we laughed and laughed.  What a pleasure.

I also had a chance to perform some of the songs from A New Wrinkle, our musical revue on aging, at the conference.  I love performing. It is a form of play that I find very freeing. And to perform in front of such a welcoming, loving audience was very exhilarating indeed. I sang Baba Yaga's Raga and excerpts from Sex after 60, and shared the lyrics of Death is Right around the Corner, too. Dr. Rick Moody and I were sitting next to each other that evening. His comments really made my heart sing! When I came back to the table after performing, he was enthusiastic. "Genius!" he exclaimed. Wow, okay, that's a good review in my book. Later he told me, "Your performance was the capstone of the conference."

Thank you, Dr. Moody. That kind of affirmation and encouragement is helpful to me as an artist and human being. He gave me some other feedback too, suggesting that I could add stand-up comedy to my repertoire. Ha ha ha. Seriously. I do love being funny, silly and foolish. I appreciated his comments and the self-reflection they afforded. And yes, it felt great to have the songs from A New Wrinkle so appreciated by the Sage-ing folks.

Composer Laura Rich and I continue to work on new songs we are creating for A New Wrinkle. I'm working on one about Medicare and Social Insecurity right now. I've written lyrics for another song titled The Silver Tsunami as well as two songs that are meant to contrast with each other on ways of perceiving the aging body. One is sung by a woman who thinks plastic surgery will solve her problems, and the other is a gospel song The Body is the Temple of the Soul. I know they are going to be fun together. That's what's happening with A New Wrinkle at the moment. 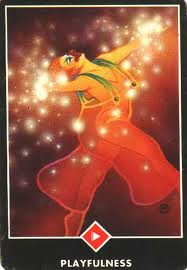 I wanted to share some comments from Sue Shoemaker, who came to the Sage-ing conference from Michigan. I first met Sue on ElderwomanSpace, an Internet community we both belong to. It was delightful to meet her in person. I think that her comments are insightful, especially since this conference was her first experience with Sage-ing. Now she is headed to Indiana to take the Sage-ing Leadership training! You go, Sue!

Sue liked  "the consistent references to storytelling ... right from the beginning, we brought our voices into the room by telling the story of the water we brought from home. Gaea's workshop really brought out the storyteller in each of the participants. When they talked about their joyful childhood memories, it was clear they found enjoyment in the remembering and telling. I attended the workshop The Power of Storytelling, and it was clear that we all are natural storytellers. We had lots of opportunities to share what we we thinking and what we have learned."

Sue continues, "In all of the sessions, there was a healthy blend of listening and sharing.  It was extremely participatory.  For me the opening session, singing that beautiful song BY BREATH  touched me deeply. Then to be welcomed by the gentleman from the Cherokee Tribe, realizing we were meeting in the part of the country that they inhabit. I also appreciated that all of the people who were fairly renowned were as friendly and approachable as anyone else. LAUGHTER -- from the session on Playfulness to the various Plenary Sessions, humorous comments and stories led to lots of laughter.  Don't think I heard any complaints, gripes or curmudgeonly comments the whole time I was there. I also did not hear about any health issues, surgeries, or aches and pains."

Sue also pointed out the spiritual quality that was an important part of the conference. "I am sure that is why the opening and closing sessions resonated so deeply with me.  I felt a connection that moved me deeply inside. Having been disconnected from "religious" experiences for several years now, the music on that first night moved my being in the way that certain spiritual music has touched me in the past."

Thanks, Sue.  Your comments tell a good story about the conference.

I also met Ina Albert in person for the first time at the conference. Ina is a Sage-ing leader who lives in White Fish, Montana. She and I we realized we were kindred spirits and started connecting by email and phone.  I asked Ina to send me some of her observations about the conference to include here. They will be part of my next blog essay.

We are familiar with the various ways people dress up and decorate themselves in our culture in an every day way.  Halloween is nearly here, and people are getting ready to go even further, take on alter egos and make believe they are Elvis, the upstairs maid,  Mary Poppins or some chap from Transylvania.

I think the Omo culture has magical ways of dressing and ornamenting themselves. This one image will give you some idea of what I mean. If you want to see more gorgeous Omo costuming from natural materials, get thee to Google and do a search.

On another note entirely, I love this funny Halloween group therapy cartoon.


Just before I went out to a meeting this afternoon, I headed to the mailbox and found The Five Stages of the Soul, by Dr. Moody and his co-writer David Carrol. I began to read it before I left for the meeting, thinking of one of Rick Moody's comments to me. "Let yourself go even more," he said. Yes, indeed. Letting go of the so-called self is one of the big jobs of aging.

I know I'm going to love this book, which explores the wish for meaning in life, especially later life. But more on that anon.

Email ThisBlogThis!Share to TwitterShare to FacebookShare to Pinterest
Labels: Dr. Harry Moody, Sage-ing International, The Seven Stages of the Soul