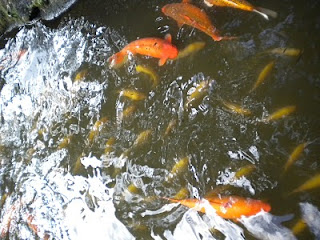 Hard to believe that over a month has passed since I wrote a word here. In that time, I did a short good meditation retreat chez moi, traveled to the SF Bay area to attend Tibetan Buddhist empowerments given by the venerable and profound spiritual master Yangthang Rinpoche, hung out in Ashland developing my creative projects and traveled to Oahu for a visit with my longtime friend Shari Sunshine. These photos are from my Hawaii trip. The bright koi in the temple pond at Byodo-In Temple symbolize prosperity, and I wish that for all of us. 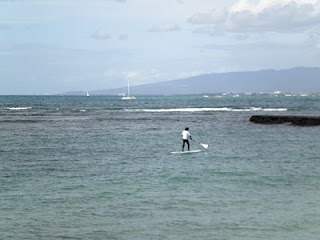 We hung out on a beach near Waikiki. This thin, old Hawaiian man really enjoyed himself skillfully out on the water. Shari and I contented ourselves with swimming in the delicious ocean water and sunning ourselves, on days when the sun was out, which seemed to be every other day. I enjoyed the weather, including a dramatic tropical storm with high winds and torrents of rain. 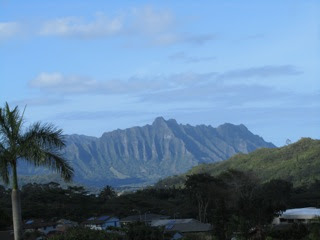 The island landscape includes steep mountains that run down its center. There is nothing like the island air, warm and fragrant. We explored some of the towns and villages on the North Shore, famous for its big surfable waves, of which none were apparent when we visited.

The real Hawaii as some people call it is hidden because Only 5% of the population are native Hawaiians. There are many Chinese and Japanese people, as well as Koreans and Filipinos and caucasians. Of course there is a lot of racial mixtures. Hooray! There are Buddhist temples everywhere. We visited two of them, both wonderful in very different ways. 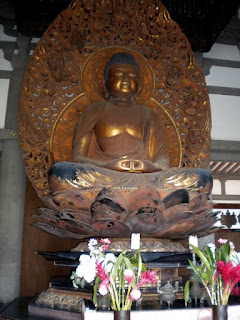 The Japanese Byodo-In Temple at Valley of the Temples Memorial Park is a replica of a temple built in Uji over 900 years ago. It contains a large statue of Amida or Amitabha. 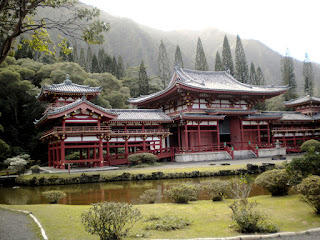 The temple and its gardens are very peaceful, although nobody really seems to go there to spend any time in sitting meditation. Japanese people bow and stand briefly and make incense offerings to the Buddha. Tourists wander. Everyone enjoys ringing the enormous temple bell, taking in the beautiful old architecture and the auspicious big pond with its jeweled koi and black swans. 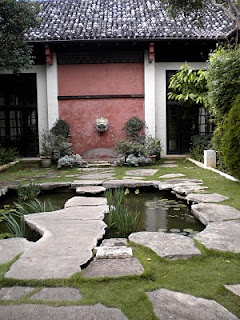 We visited a delightful art museum whose architecture shows the prevalent Asian influence in Hololulu. This is one of its courtyards. We had some wonderful meals in Chinatown. It was quite a pleasure to eat some good Japanese and Indian food, too. When I returned to Ashland, I realized I would not have that expanse of cuisine choices for awhile. 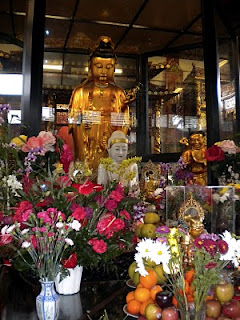 The Chinese Kuan Yin Temple is located next to Foster Botanical Gardens. In the temple again no real quiet or habit of sitting in meditation was evident. People instead brought beautiful flower and fruit offerings and lit incense, then chattered happily with each other. It was a beautiful place. There are big Kuan Yin shrines all over Honolulu,including in shopping centers, and people stop and make incense offerings as they go about their daily lives. I liked being in a place with a lot of Buddhists though it was odd to be with such constantly active ones. I'm more accustomed to temples where we sit together in stillness. 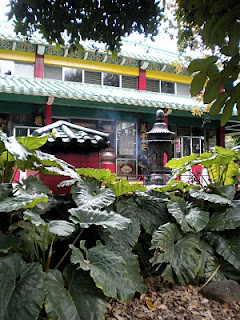 Of course I took other pictures, too many for this entry. The botanical garden, one of several in Honolulu, was wonderful. It had 24 trees given the designation exceptional because of their size, age, or type. Big beautiful trees, lush and healing.

I met a wonderful guy named Jerry Shapiro. What was wonderful about him? He has had a long happy marriage in which both partners were committed to personal and spiritual growth. (His wife Joan was in Cambodia on a service project of some sort then.) He was a happy and self-aware person. Our two conversations about aging were stimulating and inspiring. I hope I get a chance to hang out with him again one of these days.

All in all it was a wonderful trip, especially because it was a chance to spend so much time with my dear friend Shari. We visited World Medicine Institute, where Shari is studying acupuncture and met with Mike Zanoni, an acupuncturist whose office I shared when he was in Ashland. He showed us the other acupuncture college, where he teaches. Yes, I thought about moving there. I am always thinking about being in a place by the ocean with warmer weather. But Hawaii isn't that place for me.

Now on a gray Sunday in Ashland, I contemplate this new year. I'm thinking about trade winds and wayfinding, both of which have to do more with being than doing. It seems that the term trade winds originally derived from the early fourteenth century late Middle English word 'trade' meaning "path" or "track."Historically, the trade winds have been used by captains of sailing ships to cross the world's oceans for centuries; they enabled European empire expansion into the Americas, and trade routes to become established across the Atlantic and Pacific oceans. It helps to know about the way the wind blows, and as Bob Dylan says, you don't have to be a weatherman to do it.

Wayfinding involves navigating on the open ocean without sextant, compass, clock, radio reports, or satellites reports. The wayfinder depends on observations of the stars, the sun, the ocean swells, and other signs of nature for clues to direction and location. Wayfinding was used for voyaging for thousands of years before the invention of European navigational instruments. In the 20th century, it is still practiced in some areas of Micronesia, although the traditional knowledge and techniques are in danger of being lost because of modernization and Westernization of the cultures of these areas. However, a revival of the art and science of wayfinding is underway among the Pacific islands, a revival led by Nainoa Thompson, the first modern-day Polynesian to learn and use wayfinding for long-distance, open-ocean voyaging.

Beautiful, in my eyes, this kind of wayfinding. Checking the winds and waters. That's what's going on inside this gal as she sails toward 70. In this midst of this wild churning violent Kali Yuga age, in the midst of the extraordinary beauty of this world, sending you greetings. May the way be found and the waters be friendly. If there are difficult passages, may there be strength (and even delight) to meet them. Every day is a fresh awakening, every moment a new vista.

What are your adventures like these days?
Posted by Gaea Yudron at 9:29 AM