Year End Round Up 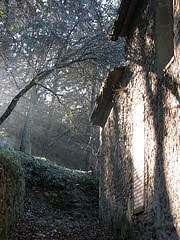 I thought it would be interesting to take a look at what I've covered this year in the Sage's Play blog. Here's a summary, starting in January 2010. Blog posts marked the passing of human potential figure George Leonard, feminist theologian Mary Daly and gerontologist Dr. Robert Butler.

Some of the film and video mentions included:
Elizabeth Gilbert's TED.com talk on creativity
Dan Buettner's TED.com talk on longevity and cultures that support it
A new documentary on the life of local activist/artist Dot Fisher-Smith
The German film Cloud 9 for its fresh take on late life romance
A trailer from the film on women and creativity "Who Does She Think She Is?"

Book reviews included:
The Making of an Elder Culture by Theodore Roszak
The Longevity Prescription by Dr. Robert Butler
Audacious Aging, an anthology edited by Stephanie Marohn
The Measure of My Days, Florida Scott-Maxwell
Somewhere Towards the End, Diana Athill

I think there were more book mentions and recommendations, but that's good enough for now. I spotlighted well-aged singers and often included film clips of their singing. BB King, Leonard Cohen, Etta James,Yoko Ono, Chavela Vargas and Judy Collins were included. I talked about a grandmother who has become a very popular international DJ-- Ruth Flowers, aka MamyRock and shared news about the work of 91-year old artist Vollis Simpson and dancer Twyla Tharp. Other posts featured 91-year old yoga teacher Tao Porchon Lynch and yogini Iris Lambert, who's a bit younger. I shared news about the theater troupe Crackpot Crones and talked about Peg Rubin's Center for Sacred Theater.

I suggested that we develop an Elder Hall of Fame and noted some of the folks I would nominate for it. The Elder Hall of Fame is still one of my favorite notions. In between all that, I talked about creativity and health, my own creative process and projects, mortality, Buddhism, poetry, friends, relaxing in hot springs, housing, travel and of course the weather.

I am not surprised by how many vibrant, creative, innovative older people I discovered during the year, whose work and lives I shared in this blog. But there are many people who might be surprised. They still subscribe to the Decline Model, and regard aging as a terrible time of life, something to be avoided at all costs. I hope the consciousness-raising music of the Church of the Radically Alive Elders reaches their ears soon.

Here's a quote from Malidome Patrice Some's Of Water and The Spirit, a book I really love. The book itself is about the power of initiation. This quote speaks about the place of elders in society. "Elders and mentors have an irreplaceable function in the life of any community. Without them the young are lost--their overflowing energies wasted in useless pursuits. The old must live in the young like a grounding force..."

This is what we must remember and live into. Otherwise, we will continue to buy into the values of a society where perpetual adolescence is the goal. As I've said before, I was young already. Now I'm in the new growth stage of oldness. It's a good, gentle, powerful, creative, compassionate, wild place to be. Let's "act as if" elders are already valued and respected. Eventually, it will catch on.

Wishing you a wonderful holiday season and looking forward to more friendship and collaboration in the fields and gardens of positive aging in the coming year.

P.S. I plan to take a bit of a blog break--that's good for the soul from time to time. Happy trails to you until we meet again.
Posted by Gaea Yudron at 3:49 PM