A Googles-Eye View of Aging 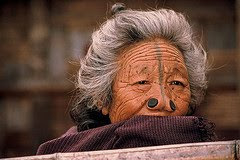 How about using Google for some impromptu anthropological research? For instance, enter the keywords "pro aging"-- 13.5 million possibilities. There's a few think pieces scattered throughout that examine what pro-aging might mean. There's some maniacal life extension entries (does pro aging mean living forever?)and a lot of entries on Dove Soap's pro aging campaign, which used photos of older women. **SHOCK**

How about "anti-aging?" 11 million entries focused on life extension, anti aging medicine, exercise, supplements and how to look younger. UNICEF capitalized on the fascination with anti-aging in Germany to launch a cosmetic series the purchase of which provides funds to help children in Africa, where so many children die before they have a chance to grow to adulthood, much less age.

How about abandoning pro and anti and just going for "positive aging" which has a mere 2,870,000 entries. There are a lot more interesting sites to explore here--books, conferences, newsletters, retirement coaches and more of a focus on happiness and personal growth. I liked this site and the services offered. Revolutionize Retirement

Some people are focusing on doing just that. Check out this interesting site where filmmaker Patrician Sahertian discusses her documentary film on ageism in the workplace titled Cut Back: Fighting Ageism. Documentary on Ageism in the Workplace

Of course, you can always take your own Googles-eye view of aging and see what you come up with.

Photo of an Apatani Woman in Arunchal Pradesh India is by Rudi Roels, from Flickr.
Posted by Gaea Yudron at 11:45 AM