Baba Yaga is My Homegirl 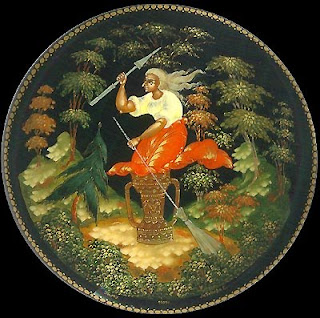 “Some day you will be old enough to start reading fairy tales again.” --C.S. Lewis


I guess I am qualified, because Baba Yaga, the Russian fairytale hag, is my homegirl. The Urban Dictionary defines homegirl as "The girl who's always there to talk to and who can talk to you back about all kinds of stuff. You've been through a lot together." And that sure applies to Baba Yaga and me.

I'm already on close terms with Coyote Woman, who is mythic and often mischievous. Now Baba Yaga has appeared, too. Perhaps I should be concerned to be associating with them this way. But I'm not. Nothing like a Kali type figure to stir things up. And Baba Yaga is that, an archetype that moves between the visible and invisible worlds. She's a crone, a Black Goddess, a dark woman of knowledge. She can be a bit dangerous and unpredictable.

When I began writing A New Wrinkle (a musical play on aging, which you may have already heard me say) I was looking for a character that could take part in the action in an unconventional way, without being affected by or caring about what anybody thought of it. I wanted a character that could move between ordinary and magical reality. That's how Baba Yaga showed up. Well, actually, who knows how she showed up. This stuff comes in via the Orphic Radio.

And she has done a good job of playing her part in A New Wrinkle. As an additional bonus, from hanging out with her so much for months, I have developed my inner Baba Yaga!

Wishing you all a new year full of joy and adventure.
Posted by Gaea Yudron at 8:05 PM