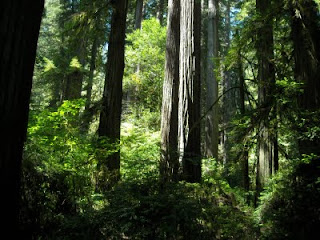 An old forest is different from a young forest. It is fuller, deeper, more complex. When we enter an old forest, we feel nourished, rejuvenated, inspired. It took a long time for that forest to mature to the point where we feel embraced so fully by it. That's oldness.

The mysterious winding paths of very old cities are satisfying to us in ways that new cities cannot be. We find in old manuscripts and statues, old brandy and old gardens a kind of pleasure and sustenance particular to oldness.

Here's something strange: an ancient redwood forest is wonderful, yet an old person is laughable. Nobody wants to be called OLD. The word OLD when used to describe an older person is as genuine a dirty word as any 4 letter word, even though OLD has only 3 letters.

Yesterday I was imagining what it would be like to create a T shirt that simply said OLD and wear it around town. After I thought about it for awhile, it seemed that the whole thing would work better as a piece of performance art, with a troupe of kindred spirits and a bit of fun choreography. I smile to imagine this happening in cities all over the country. It's quite possible and it would be quite wonderful to see that flower.

In his marvelous book The Force of Character and the Lasting Life, psychologist/scholar James Hillman takes a look at the word OLD and our ideas about oldness and old people. I love Hillman's writing and his keen and poetic mind; I highly recommend this book, which will provoke and inspire you to explore aging in new ways.

"Since 'words do not live in dictionaries; they live in the mind', as Virginia Woolf put it, the old mind is lowered by the lowering of "old" to its present undesirable condition: old maid, old fashioned, old guard, old boys, old witch, old fogey, old fart," Hillman writes.

The word old, he points out, is itself a very old word, deriving from an Indo-European root that means "to nourish." Oldness nourishes. We know that. As older people, we know the ways in which an old forest is different from a young forest.

It seems to me a very good idea to reclaim the word OLD. Personally I don't want to be describing myself as 70 years young, if I have the fortune to live to 70. Which of course I hope to do. I was young already. Why would I want to settle for being called 70 years young, the description of an earlier stage of life, which does not take into account everything I have thrown into the alchemical retort over the years?

When did you know you were old? one of my friends asked me the other day. It reminded me of how for many years I was uncomfortable about being a woman in a male-oriented culture. I wanted to be masculine, which I identified with successful. So I am quite familiar with the sense of not being the highly accepted one. It was a struggle to find and accept myself, to understand the unique and valuable qualities of being a woman, a particular woman, and to let go of trying to be one of the guys. I did that and at this point I don't need to do it again, in terms of trying to imitate youth. I was young already. Young people have not yet experienced being old. They still have that to live into.

It's only recently I feel comfortable with being old. I knew I was old when I felt comfortable with it. I acknowledge and value where I am now. I'm an activist of OLD these days. I'm coming from the OLD days, singing the OLD songs. Reclaiming OLD.
Posted by Gaea Yudron at 7:58 PM