Character and What's Revealed Over Time 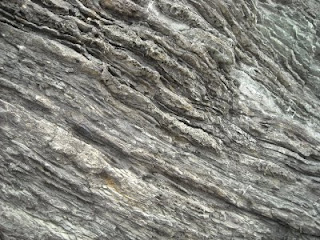 I took a picture of this 20 foot tall boulder by the edge of the sea two weeks ago. It has a lot of character. Strata. Pattern. Complexity. Beauty. Age. How old? How long has it been standing there at the edge of the Pacific? I have no idea, but I do know how happy I am to see it there.

Everything in nature has character of course. It's all a beautiful panoply--ferns, massive geologic formations, lakes, oak groves, elephants, whales, foxes, beetles--each living thing has its own distinctive, marvelous qualities.

In human beings, character is usually something that develops over time. Though character development in psychology has largely focused on children. Sometimes young children appear who seem wise beyond their years, but on the whole, it takes decades for human character to develop fully or mature.

"We become characteristic of who we are simply by lasting," James Hillman notes in his book A Force of Character and the Lasting Life, which I mentioned in my last post. I am re-reading the book. When I read what Hillman writes I think of how many friends have said to me, "Now I feel comfortable with myself." As they age, they relax and settle into being themselves more fully. In the process, they embody and share their distinctive qualities more easily. Their character--what has accumulated and been learned over time-- becomes easier to see and know.

"What ages is not merely your functions and organs," Hillman writes, "but the whole of your nature, that particular person you have come to be and already were years ago. Character has been forming your face, your habits, your friendships, your peculiarities, the level of your ambition with its career and its faults. Character influences the way you give and receive; it affects your loves and your children..."

What is revealed over time? What is most deeply important? What is unfinished and wants to be released? What is unfinished and wants to be completed? What healing, reconciliation and life repair cries out for attention? What wants to be shared? These are some of the questions I ask myself these days as I sail towards 70. I have character, and sometimes I am a character, too, less confined by social convention and expectations than I was in earlier decades. This is relaxing. There's still plenty of work to do. My character development is incomplete. The alchemical process continues.

I've always been an artist and it has taken many forms over the years--journalism, environmental activism, experimental music, healing work, theater, (last but never least) poetry. Since January, I've been working on a musical on aging titled A New Wrinkle. I probably could have finished it sooner, if I had ever written a play before. But I never have written a play. I have done some one-woman shows, but that is another creature entirely. So writing a play has been quite a learning process. And without help, especially the help of my playwright friend Carolyn and the help of good lady Hilary, a woman with highly developed literary sensitivities, I never could have gotten to the place where I am, which is close to being finished with a good first draft. That includes the lyrics to 7 wonderful songs. I am working with a marvelous composer on the music. It is a very exciting project.

Couple of weeks ago I went to a playwrights meeting at the local library. When we were introducing ourselves I shared that I was writing a musical on aging. One man (far more obvious in his reaction no doubt) laughed out loud. And let's face it, it is funny. A musical on aging. Most people think aging is pretty awful, laughable, ridiculous. I can't say that's why the guy laughed at me, but I can say that's one reason why I am writing this play.

It is time for the emergence of a new paradigm of aging and old age, with millions of people aging, living longer and staying healthier.

Have a wonderful end of summer. My next blog post will be in September.
Posted by Gaea Yudron at 11:37 AM