In the Doldrums, Events Unfold


The doldrums are a low pressure area around the equator where prevailing winds are calm--a belt of calms and light, baffling winds north of the equator between the northern and southern trade winds in the Atlantic and Pacific oceans.

It is a rich place, this respite of calm. The expression "In the doldrums" has come to mean a time of listlessness, apathy and stagnation, but I do not agree.

To be in the doldrums can mean that you have a respite, a place to contemplate the recent journeying.

This is where I find myself as I live in the small apartment that dear Iridea found for me, which looks out onto the white wall, which I think of as my view, in the Zen style.

Ensenada is a (to me, with apologies to those who find it magical) gritty border town, and of course it has some lovely qualities as well.

What drew me here is the Yeshe Nyingpo Mexico sangha, a spiritual community that is allied with my heart center Tashi Choling Center for Buddhist Studies in Ashland, Oregon. If my longtime friends Ignacio and Loreto Beamonte had not been nurturing a Dharma center here for many, many years in a shrine room located behind Ignacio's natural food store La Milpa, it is unlikely I would have stopped here.

But they have dedicated themselves to sharing the Tibetan Buddhist teachings with others for many years. I must acknowledge both of them, and some of their children, too, for those years of commitment and effort.

The spiritual community in Ensenada is warm and welcoming. I was fortunate that my arrival coincided with the teachings presented by Khenpo Tsewang Dongyal, an esteemed Nyingma master.

The connection with the Ensenada aspect of my spiritual  community has made it easier to be in this somewhat gritty city near the US border. In early March, just before I leave, my longtime friend Lama Bruce Newman will visit here to give teachings, too.

I have met a number of people who absolutely love Ensenada. Some were born here, and some emigrated from Mexico City or the US. They love its relatively relaxed qualities. When I compare Ensenada to a much bigger city, I understand their appreciation.


I have found some glimpses of beauty here too. But my journey here has made me recognize that Ensenada is not a good place for me to settle down, at least not right now. Instead, it is the right thing to return to Ashland, Oregon where I have lived for many years.

I arrived in Ashland in 1978 and lived there most of the time except for 4 years in Portland in 1984-88, and a few months more in Portland in 1997.  There are things about Ashland that started to aggravate me: a quality of preciousness, aren't-we-special, an increasingly conservative quality due to the influx of many well-educated, self satisfied retired people, and etc.

I imagine that these months of solo travel in Mexico have given me some new understandings and a fresh perspective on living in Ashland again. And who knows, I could someday choose to live in Mexico for a longer period of time.

But for now, being close to my spiritual community of Tashi Choling and in the midst of my longtime community is most important.

This is the real journey, not a rehearsal

I have written mainly about my travels for the past few months, but the whole while, I have as usual been paying attention to news about aging, creative aging and the rich potential of the later years, as found in media, newsletters and posts.

Many people have commented that they find my solo travel brave. In many ways, I regard returning to the US to continue working on Sage's Play, our musical revue A New Wrinkle, and a one-woman show I plan to create far more adventurous and brave than solo travel in Mexico.

Why? It is easy to live as an elder in Mexico. There is respect and recognition for elders and none of the snideness or condescension of younger to elder found in the US.

It has been a colossal relief to experience that.

I am glad I have had the time to soak it up. Really.

It will be useful to me when I return to the US, where growing older is such a difficult terrain, where people are always glancing at your belly to see whether you have one, or at your hair wondering why it is not dyed, or when they are just trying to ignore you as if your presence is something uncomfortable or annoying.

It must be my karma to be uncomfortable or annoying, or to want to initiate positive change, because I am choosing to return to the US, the citadel of ageism. Oy vey. I guess I like a challenge.


A Few Things that Caught my Attention Recently 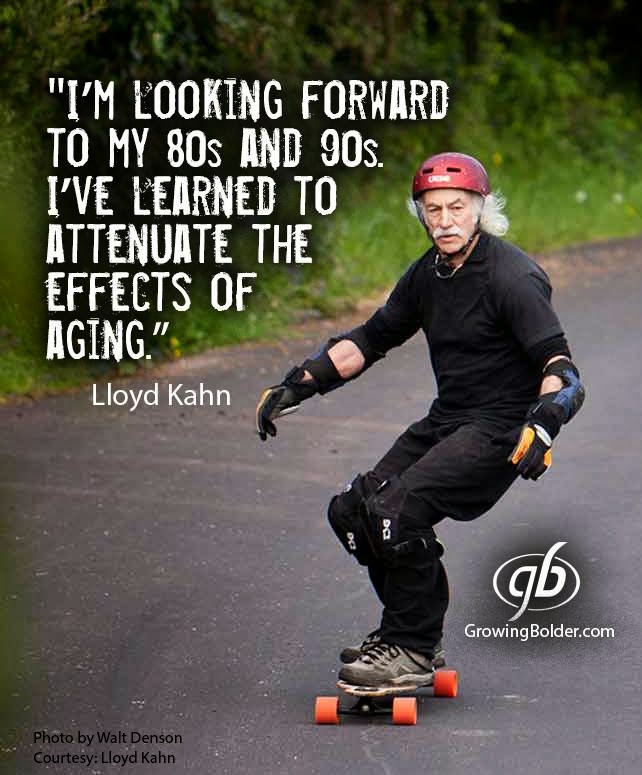 Lloyd Kahn lives in Bolinas, a small coastal town in West Marin, California and when I lived there in the early 70s I saw him here and there around town.

He was one of the originators of small shelter movement and has written a number of wonderful books in that area.

I see that Lloyd has continued to be an innovator, both in the simple hand built shelter area, and in the area of aging.

I just read an article in Huffington Post that made me laugh out loud, which in my book is always a recommendation. Its topic was what not to wear after 50.  And as it turned out it was not just about clothing. Take a look. You might enjoy it too.

I continue to follow the unfolding work of those kindred spirits who want to shift the paradigm on aging. These include The Radical Age Movement and Fierce with Age. The first focuses on creating a paradigm shift through consciousness raising, and the second focuses on the spiritual aspects of aging. I admire and support these projects...You may find them useful, too.

That's my story at the moment. I return to Oregon on March 10th, and even though I will not be posting gorgeous photos of exotic places, you might want to stay tuned in for practical, inspiring news about positive aging.

"Our real journey in life is interior: it is a matter of growth, deepening, and of an ever greater surrender to the creative action of love and grace in our hearts." --Thomas Merton