Riding The Chariot of Disappointment 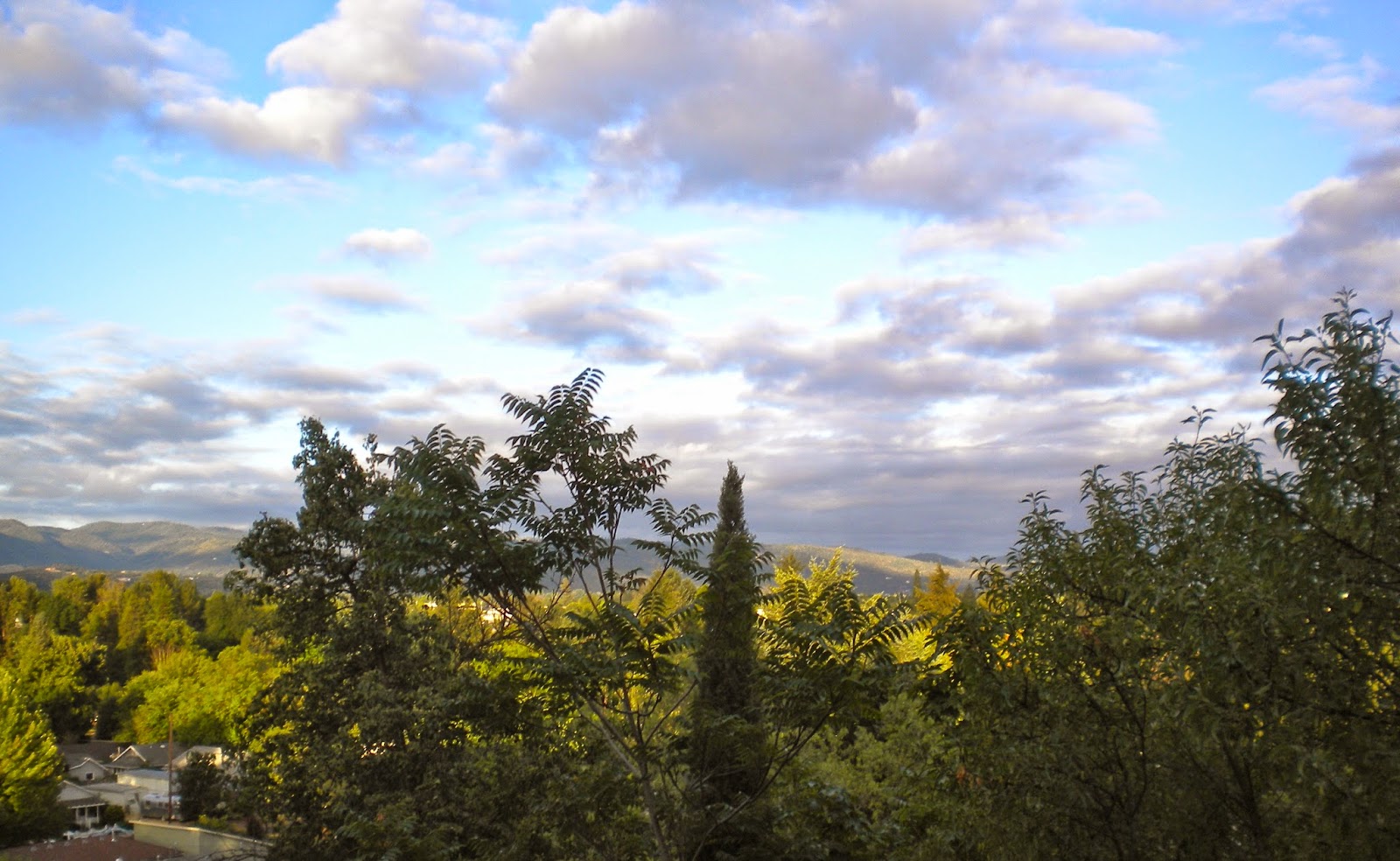 I have moved out of the flower cottage into my friend Linda's house, which is perched high on a hill with expansive views of the mountains and sky. This is the view I see each day from the balcony of my room.  It's beautiful here, and it has the panache of a new environment for me. In spite of having lived in this valley for decades, this particular area is one I never explored before now. It's full of gorgeous old houses, beautiful trees and elegant gardens. There's a big historical cemetery nearby, which is a great place to take a walk and contemplate the transitory nature of life. Or just have a good time walking with a friend.

I moved out of the flower cottage on June 20th.  The cottage was as good as sold, or so I thought. But at the 11th hour, the buyers pulled out because of an IRS lien whose total for some reason they didn't know. Go figure. It seems one should know the status of debts when trying to buy property. Rant, rave, etc. This is the second sale that has fallen through.  So I am disappointed. Very disappointed in fact. My disappointment led me to re-read a section in Chogyam Trungpa's book Cutting Through Spiritual Materialism.  In it, Trungpa says, 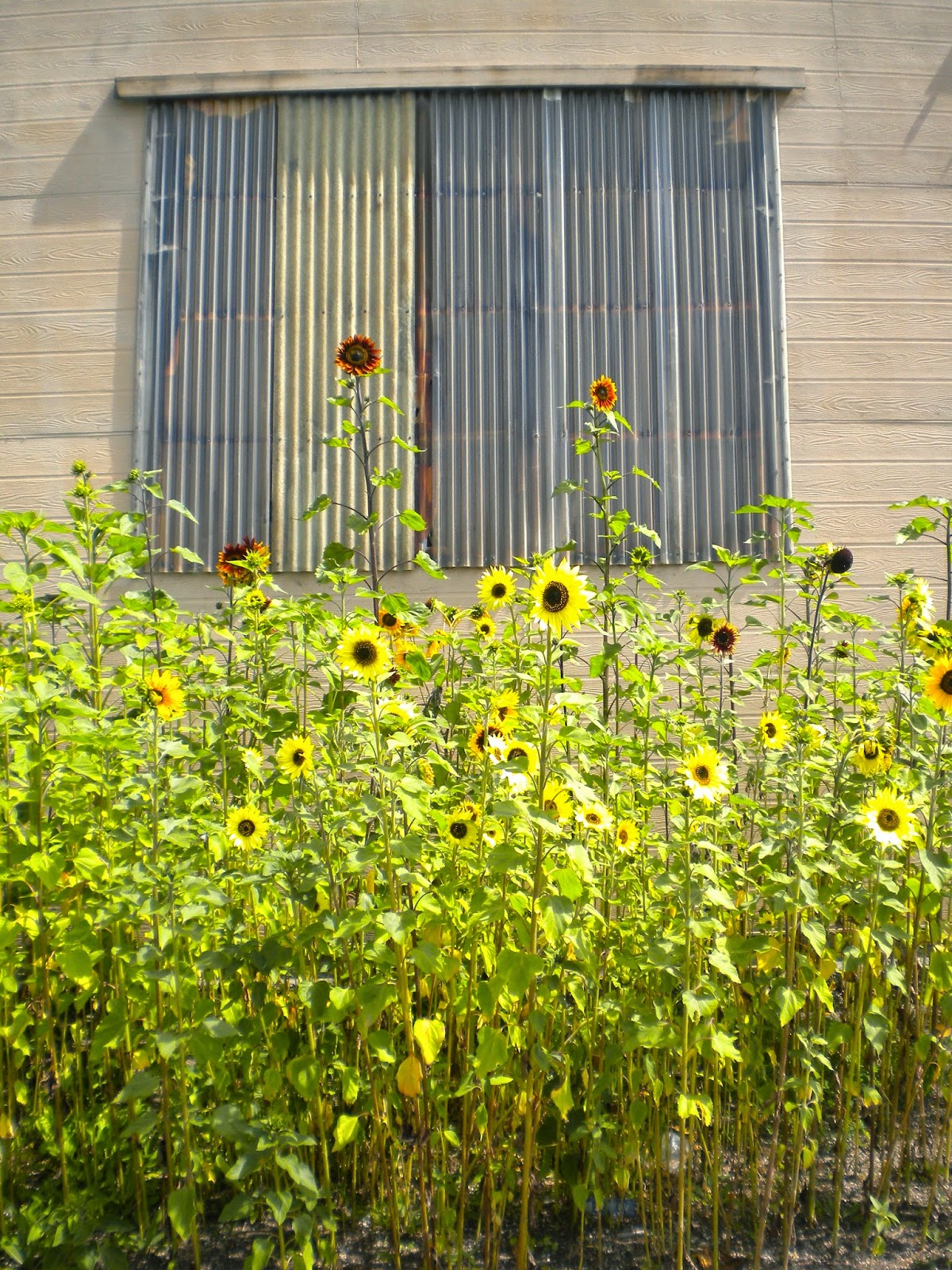 Riding the chariot of disappointment as a way of life. Okay. Okay.

I mean, you have a chariot!

I went to the coast for a few days and it was glorious, even chilly at times, amidst the redwoods at the ocean.  I found these sunflowers backed by a wonderful corrugated curtain just as I was leaving town.

It is very hot here in the inland areas--over 100 degrees many days in a row. The air conditioning at my new abode is not working at the moment either. Which is of course disappointing, stickily so.  But there is a pool close to the house. If I had any sense at all I would stop typing this blog and take a dip. Yes, I had sense and took a dip which was refreshing. Some neighbors were poolside with their granddaughter.  The condo complex where I am living is populated with older people, so I expect I'll witness many grandparents in action while I am here. As an an elder with no grandchildren, I like seeing the interaction that grandparents have with their grandkids.

I am expecting to be here for a stay of about 3 months. Then I am planning to head to Mexico, but right at the moment with the cottage unsold, still recovering from the move to Linda's and a nasty cold that came along with that, I don't want to think too much about Mexico. Not today anyway.

Rabbi Zalman Schachter died on July 3rd at the age of eighty-nine. He was famous as a pioneer of Jewish renewal. I read a number of obituaries, which confirmed his vitality, originality, ecumenical perspective and lovingkindness. He had a profound influence on many people, not only because of his innovative style of Jewish prayer and worship, but also because of his work in the field of aging. His book From Aging to Saging has become a classic. Have you ever read it? If not, I highly recommend that you do. 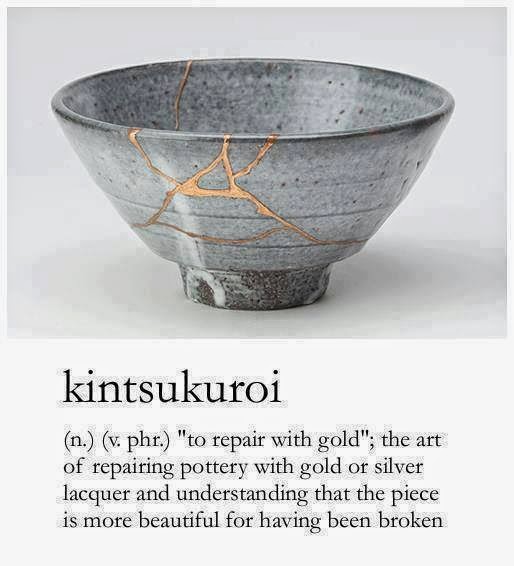 This Japanese art involves repairing broken pottery with gold or silver lacquer so that it is more beautiful for having been broken. I think that the transformed, enriched vessel depicts character, the way wrinkles do on the faces of old people. If we are lucky in our later years,  we take the time to repair and restore whatever has been broken from the deeper perspective age can bring.  And when old people make those efforts, they often appear to be very beautiful, just as this bowl is beautiful.
Posted by Gaea Yudron at 5:15 PM