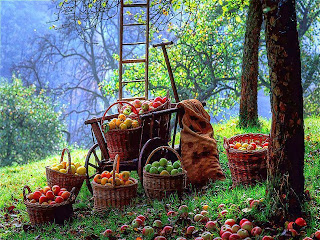 It's been over a month since I blogged here. Why? It's not that I had nothing to say. It is more that I felt inundated with media and not inclined to add to the flood.

Perhaps I will blog less often from now on. We will see.

The full moon last night was so bright. I woke before dawn and went out to gaze at its radiance and the bright display of the constellations. Even a moment or two of that kind of sky gazing fills me with considerable joy.

Tonight we're having a bit of rain. It grew dark early. I lit a candle on the mantle, something I often do in the autumn and winter months.

The squash and potatoes are harvested from the back garden, along with a rather disappointing collection of tomatoes, and I've planted cauliflower, mustard greens, chard and kale, along with some brussel sprouts, which I hope recover from whatever insect attacked them a week ago.

In a few days, we are launching a fundraising campaign on IndieGoGo in order to raise money to produce and promote our musical revue on aging, A New Wrinkle. I am sure that the adventure will be full of enjoyable surprises. I will let you know more about it when the launch occurs. Composer Laura Rich and I created a song to accompany the campaign, and it's a lot of fun. Take a listen when I send the link.

My life lately have been focused on developing the creative aging and wellness work I do through Sage's Play. I recently joined the Ashland Chamber of Commerce and have been enjoying meeting an entire cornucopia of members at Greeters meetings each Friday. It feels good to connect this way, meeting many new people, learning about their work, and getting to know them as human beings.

I gave a talk on Buddhism recently at the Rogue Valley Manor, a large residence for older adults here in southern Oregon. There was a great audience of 160 people. It was quite a good experience for me, and I know that many people there enjoyed it, because they told me so. The talk was part of a series called "Speaking of Faith" organized by Father Joel Maiorano, the chaplain at the manor. It's really the first time I gave a presentation on Buddhism, although I've been a Buddhist for nearly 40 years.

The Adventure of Aging, a series of monthly gatherings I lead at Skylark Assisted Living, have grown more and more warm and uplifting, often punctuated with marvelous humor, too. The gatherings include a variety of elements, including meditation, relaxation exercises, poetry, music, reminiscence and discussion of topics that have ranged from childhood memories to writing our own obituaries. It's been beautiful to see a community develop among those who attend. Skylark's population includes many with dementia, and the residents without dementia are in a minority. They appreciate the spiritual and human potential aspects of what we do in the monthly gathering I lead. Sometimes, folks with dementia attend as well and while they cannot participate in everything, they seem to enjoy the camaraderie and good feeling that is shared among everyone.

My individual sessions with older adults (and people of all ages), which I think of as medicine for the body and soul, have also been occupying my attention. I use hypnotherapy and rapid eye technology to help people move through a variety of issues, including pain, PTSD, phobias and addictions, among others. This work is very satisfying. I love helping people create positive results in their lives.

Of course, I spend time watching the bees and butterflies and hummingbirds in the garden and appreciating the graceful way the tendrils of the squash and cucumber plants make their way along fences or onto other plants. That will all be changing now with autumn here. Ah, it has been so delightful, this summer and now it is ending. Soon the leaves will turn golden or red and they will fall. And so it is.
Posted by Gaea Yudron at 8:10 PM