In Still Here, Ram Dass, a spiritual teacher and best-selling author of the 60s classic Be Here Now, shares the radical changes he underwent after a disabling stroke brought him close to death. He had been traveling constantly, in demand as a speaker and seminar leader. Then he found himself needing round the clock care.

Ram Dass has had a life jam-packed with adventure and he is a delightful writer and storyteller.  In this book he debunks common stereotypes about aging and gives wonderful suggestions for working with common fears and anxieties about aging.  He speaks of encountering aging from the Soul's perspective, and suggests ways to engage in the spiritual opportunities that are inherent in aging, illness and loss. Highly recommended.

Helen M. Luke's book Old Age is a more demanding read, but it's well worth it to take the time to digest Luke's substantial insights about the inner tasks of aging. She investigates these tasks from a Jungian perspective, using as subjects some key figures from literature, including Odesseus, the hero of Homer's Odyssey, Shakespeare's King Lear and Prospero from Shakespeare's play The Tempest. A beautiful look at some of the big themes of later life, including letting go and foregiveness.


In the midst of the Elder Beat work, I made candied violets for the first time. Some of them are more beautiful than others, as I lack the finesse I may develop if I decide to do it again. Now I've made a chestnut cake and will put some of the violets on it as decorations. Old fashioned. I love the delicate scent of the violets in the kitchen.

I saw two movies recently that I found wonderful. One is The Hedgehog, a French film from 2009. Wonderful characters and very good acting, with a splash of magical realism thrown in to allow us to suspend our disbelief with some of the action. There are two great older people featured, one a frumpy widow who manages an upscale apartment building and maintains a big library in a hidden room, and the other an elegant and somewhat mysterious Japanese man.

I also saw Quartet, which I loved. A great script, actors and wonderful setting. If one were to live in an old age facility, the gorgeous estate pictured in this film would be a far from shabby choice.  Gosh, Maggie Smith is finding so many roles these days and as usual she's doing an excellent job. The film has some of the same fairy dust sparkle that The Best Exotic Marigold Hotel had--one critic calls it elder fantasy. And to that I say, we all can use some uplifting fantasy, no matter what our age. In the midst of the sparkle, the film takes a look at the importance of friends, community, creativity, forgiveness and reconciliation, all important themes of later life.

This week, I led two different gatherings. One was my class at OLLI on Retirement, Refirement and Successful Aging. The second was an elder circle I offer monthly at Skylark Assisted Living, where my long-time friend Kate lives.  I enjoy both venues, and they are quite different in many ways. At the OLLI class, I discussed some of the developmental tasks of later life and shared the perspectives of Erick Erickson and Carl Jung. The notion of life review and life repair was new to some in the class so I provided some thoughts on how one might start to engage in the process. I introduced a simple chi gong exercise, too.

At Skylark, we focused on the importance of attitude in working with disability and dependence. I used Ram Dass' book Still Here as a reference. Some of the group are using walkers or wheelchairs, so it was quite relevant for them.

Gathering with others to discuss aging and its issues and opportunities is always a great learning experience.  So many older adults in our culture still live according to the values of youth, pushing themselves to hyperactive engagement, filling their entire schedule with activities, not leaving time open for reflection and simply being. That's one reason why aging entails a lot of suffering for modern people. They deny it, ignore it, try to fend it off instead of getting curious about exploring it. 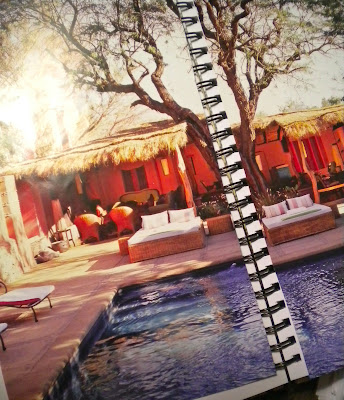 It is nearly spring and I am still in my escapist mode, dreaming of warmer climes. I found this image and put it into my visioning book because it felt good to imagine being in this place with a palapa roof and a beautiful pool nearby.

It is somewhere in Chile, I think. In my ideal year, I will spend a couple of months during the winter in Mexico or Thailand or Bali. Ahhh....it is good to have dreams.

I am still working on the final song for A New Wrinkle, our paradigm-shifting musical revue on aging. Sometimes the songs appeared as if they were waiting in the vestibule but sometimes the Muse seems to be somewhere just out of sight.

Two other projects are still in the works--something I am calling Your Audacious Aging Kit will hopefully get done soon. It seems that Songs of the Inner Life may take a bit longer to produce, but it will get done, too. All in good time as the saying goes, though the practice of patience is still one I have not perfected.

I am having two dear friends over for dinner tonight, and I am looking forward to being with them. I am fortunate to have a bouquet of wonderful friends. On Sunday, I was invited to attend an Oscar party with some other friends. I even borrowed a sequined gown to wear. I don't think I've worn a gown since I donned an emerald green satin gown for my second marriage ceremony. That was when I was in my mid 30s. So there was a considerable gap in my gown-wearing history. I was much more slender when I wore the emerald green gown, and I definitely had a waist, quite a nice waist. Having a waist is lovely, but I find I am enjoying life even without one.